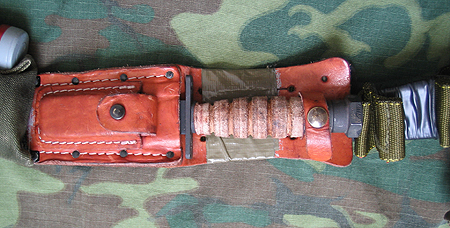 While the SOG Bowie or Recon Knife is the most well known of SOG knifes a lot of recon teams thought the knife wasn’t the best in the field, so another very common knife was the Air Force’s survival knife. Aircrew Survival/Egress Knife (ASEK) used by U.S. Aviation aircrews. The US Air Force Survival Knife made by Camillus (and other manufactures during the war) has a 5″ black phosphate coated high carbon blade with a sawtooth back. The knife has a unpolished leather handle and extra beefy hexagonal butt for use as emergency hammer. This knife comes with a leather sheath and sharpening stone that fits in a snap closing compartment on the sheath. With an electrically insulated handle. 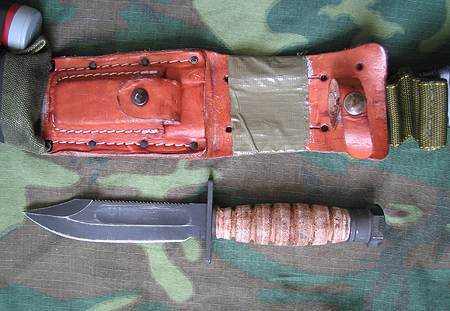 “The Air Force Survival Knife was designed to meet a particular requirement for the military. As such, this knife was not intended as a frontiersman or bush craft knife, per se. The design features for this knife came about through various inputs from servicemembers, survivability researchers, and training developers. Moreover, the requirement for having a standard survival knife for pilots and aircrews across the DoD was due to economic considerations and budgeting constraints at the time which fostered standardization across the military services. Furthermore, standardization of equipment reduces costs upon the logistical system. These influences upon the procurement system tempered the DoD design features of the knife.

Additionally, the jet age in military aviation increased the number of gear pilots and aircrews had to carry on their flights. Thus, finding ways of reducing the bulk of the Aviation Life Support Equipment (ALSE) assisted in the overall weight considerations for flying. Consequently, the knife blade being reduced from six inches to five inches allowed it to retain some of the qualities necessary to carry out survival tasks, but small enough that it could be easily stowed on an aircrewman’s vest without causing interference for aircrews trying to carry out their duties while flying.

In particular, some questions that arise with this knife are those regarding two specific features of the knife: the saw-toothed spine and the two holes in the handguard. The serrated spine on this knife is part of the functional requirements for this knife. One of the tasks that this knife was designed to accomplish was helping pilots and aircrews egress their downed aircraft or to help first responders extract them from their downed aircraft. The serrated spine was designed to cut through the aluminium skin surrounding the airframes of Korean and Vietnam War-era aircraft. The sharpened clip point on the blade allows the pilot to punch a hole in the aluminium then use the knife spine as a hasty saw to cut through the aircraft skin during an aircraft egress situation.

Additionally, synthetic composite materials like Kevlar had not been fully integrated into aircraft construction until the late 1970s and 1980s. Thus, this knife became obsolete for its original intended use when the majority of military aircraft incorporated composite materials. However, it was still adequate for survival situations and therefore remained in the Federal Supply System.

The second question that arises concerning some of the features of this knife is the purpose of the two holes in the blade guard. As best as can be ascertained, the two holes are used as lashing points for cordage for survival tasks in the field, such as creating a hasty spear. However, there is not enough information in the literature to determine with certainty the purpose of the holes. As with many uses of military equipment, service members use considerable ingenuity in the field when employing their equipment and therefore, the use of the holes in the blade guard for cordage lashing points may have been a field expedient use of the knife rather than as an intentionally designed purpose.”