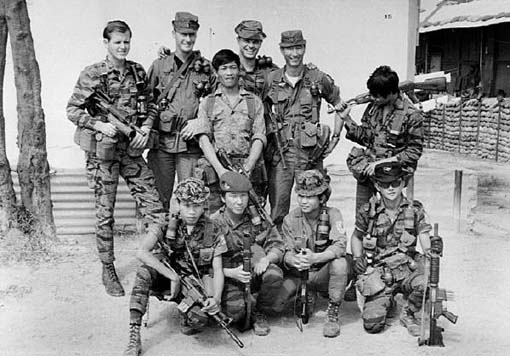 For veterans visiting this page, there is a great active online community on Facebook for MACV- SOG veterans and families run by Jason Collins and Paul LaFrance 1-0 CCS. Click here

John Stryker Meyer :entered the Army Dec. 1, 1966. He completed basic training at Ft. Dix, N.J., advanced infantry training at Ft. Gordon, Ga., jump school at Ft. Benning, Ga., and graduated from the Special Forces Qualification Course in Dec. 1967. He arrived at FOB 1 Phu Bai in May 1968, where he joined Spike Team Idaho, which transferred to Command & Control North, CCN in Da Nang, January 1969. He remained on ST Idaho to the end of his tour of duty in late April, returned to the U.S. and was assigned to E Company in the 10th Special Forces Group at Ft. Devens, Mass. until October 1969, when he rejoined RT Idaho at CCN. That tour of duty ended suddenly in April 1970.

John is the author of two excellent books on his time at MACV-SOG and these can be purchased on his website, sogchronicles.com.

Military Assistance Command Vietnam – Special Operations Group) in Southeast Asia. While attending the University of Colorado, he worked for the National Bureau of Standards conducting research in the ‘Time and Frequency’ Division. He became involved in Veterans’ politics and for ten years worked as an advocate for disabled veterans. He has also had the good fortune of being a janitor, ditch digger, honey-dipper, carpenter, surveyor, and exotic flower farmer. He spends his time writing and insulating himself from the madness of society by practicing the esoteric internal arts of Taoism. He is the sole member and Lord Supreme Ruler of the Society of Disturbed American Veterans.

John Good: John served in SOG on RT Texas and RT Arizona, he also worked with the HALO teams on planning for the worlds first combat HALO jump. In 1972 he returned to Vietnam to work security at the embassy until the US withdrawal.

An interview and pictures of John Good can be found here.

John C McGovern: served in the US Army from 1958 to 1979. He started his Special Forces service in 1964 and served 2 tours in Vietnam. When he first went to Vietnam in 1965, he served on 2 different A Teams. he then returned to the States in 1967 and went back again in Jan of 1968 to the battle of Khe Sanh with SOG. I started out as a one-one on a recon team then took over as a one-zero when his team leader left. In June of 1968, (when they closed out Khe Sanh) he was sent to Phu Bie and was placed in charge of a Hatchet Force Company. Later on he was assigned as the one-zero of RT Virginia untill just before he came home in Jan 1969. John was also the leader of teh Bright Team mission featured in Lynne M. Blacks book Whiskey Tango Foxtrot.

We have an exclusive interview and photo album from John C McGovern.

Larry Crowder: Is a retired US Army veteran of 26 years of service who had four combat tours. In 1970 he was a Communications specialist assigned to the US Army Special Security Group, Assistant Chief of Staff for Intelligence, DA, HQ MACV (ACSI SSO). Upon being assigned to Vietnam in 1970 in August the unit attached him to the Studies and Observations Group. (SOG) in (November 1970, where he worked until April 1972.

Our interviews with Larry Crowder can be found here and another one here.

Lynne M. Black Jr: Lynne Black was the 1-0 of RT Idaho and RT Alabama and was awarded the Silver Star, Bronze Star with Second Oak Leaf Cluster, the Vietnamese Cross of Gallantry and tech Purple Heart. He was also awarded one of SOG’s most coveted awards The Reconnaissance Team Leader Special Recognition Award, better known as the Silver Pistol. He is the author of Whiskey tango Foxtrot.

Our interviews with Lynne can be found here and an excerpt from his new book here.

Bill Barclay: Bill was 1-0 of RT Krait who were part of CCN. He was at CCN, August 23, 1968, when it was hit and they lost the most men Special Forces had ever lost in one engagement, to this date.  He then went onto Recon Team Krait, and later became the One Zero of RT Krait. He left Vietnam in July, 1969.  He then went back to Fort Bragg, NC, and was an Instructor at the SF Officer’s Course.  When he got out of the Regular Army, 20th Special Forces found him and he stayed with them until 1993, in B Co, 3rd Bn, FLANG.  He retired as an E-8 but stayed Active Reserve and last assignment, 1997, to USASOC at Fort Bragg. So a career Special Forces soldier.

Nick Brokhausen: Nick served with RT Habu and RT Crusader, forming the longest 1-0 and 1-1 partnerships in SOG while at RT Habu. He also wrote the legendary and now out of print We Few, his recolections of his time with SOG.

Our interview with Nick can be found here.

Steve Perry: Steve was One One on ST Idaho from December 1967 thru March of 1968 when he was reassigned as One Zero of ST New Jersey. In May of 1968 he was a strap hanger (due to my prior position and experience on ST Idaho) on ST Oregon.

Michael Stahl: Michael spent two tours in Vietnam with Special Forces, his second with SOG at CCN. After completing the 1-0 course he was assigned to RT Michigan. He was also a keen Skydiver.

Our interview with Michael can be found here.

Bill Kendall: Bill Kendall was with SOG in the early days, from 1964 to 1965 and then did another tour at CCC in 1968. This was a great period of change for SOG with the change over from CIA management to being run by the Army. The early years had a focus on agent insertion into North Vietnam and less on cross border reconnaissances into Laos and Cambodia.

Major (Ret) Terry Thomas: Our latest interview is with Major (Ret) Terry Morris who had a long and varied Military career from Special Forces, to flying gunships in spoort of SOG and ending up as Deputy Commander of the Test and Evaluation Divison, Combat Develoments at the Infantry School, Ft. Benning. In his own words “I started my career as a Pvt with the 82nd and ended up a Major 25 years later. Served most of my career in the 82nd, 101st and SF with a couple misc leg assignments in between. During my two tours in VN I was shot down 7 times, and earned the Silver Star, 4-Distinguished Flying Crosses, Bronze Star, 57-Air Medals three with V device, 4-Purple Hearts, ARCOM with V, and a bunch of I’ve been there ribbons”

Our interview with Terry can be found here.

Steve Bookout: Steve Bookout had a varied flying career in South Vietnam from flying SOG, Phoenix, PRU, Marine Snipers as well as General Westmoreland who became a life long friend. He is also a good friend of John McGovern who we have also done an interview with. Steve also features in a new film about the Razorback Gunship Platoon. You can find more information here.

He also had a cousin who ran recon with SOG and paid the ultimate price being KIA in 1970. You ca

n read about Charles Bookout at the end of this interview.

Joe Parnar: Joe was a Special Forces Medic who joined the Army in 1966 and arrived in Vietnam during 1968. He ran recon as well as chase medic on missions. He is the Author of SOG Medic.

Our interview with Joe can be found here.

Jim Jones-Shorten: Jim Jones-Shorten joined the Navy, transfered to the Army and ended up in the Airforce. With US Army Special Forces he was the 1-0 of RT Delaware out of CCC.

Ed Wolcoff: Ed Wolcoff had a 28 year career in the US Army and a total of 25 months in Vietnam. He was the 1-0 with RT New York.

Our interview with Ed can be found here.

Jim Hruska: Our interview with Jim has a great selection of un-published photographs as well as details of SOG HALO equipment.

Jim Bolen: Our latest interview is with Jim Bolen, the 1-0 of RT Augerand features a large number of un-published photos.

Our interview with Leon can be found here.

Lynne M. Black Jr: An excerpt from Lynnes new book, as yet untitled

Bill Barclay: An interview with the 1-0 of RT Krait

Michael Stahl: Our latest interview is with Michael Stahl, a two tour Special Forces veteran and 1-0 of RT Michigan.

Major (Ret) Terry Thomas: Our interview with Terry can be found here.

Steve Bookout: Our interview with Terry can be found here.

Joe Parnar: Our interview with SOG Medic Joe Parnar can be found here.

Jim Hruska: Our interview with Jim can be found here, includes lots on un-published photographs.