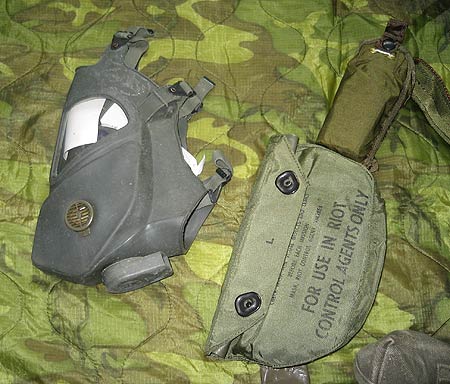 Experience in Vietnam showed that the Ml7-series mask, while effective, provided more protection than necessary and was too heavy in the light-soldier environment experienced.

What to do? Soldiers in the field needed protection against the riot-control agents in use and desired a lightweight, easily carried protective mask (or none at all). This requirement led to the development of the XM27 and the XM28-series masks. Each used a high-efficiency particulate air filter to remove the riot-control agents but provided no protection at all against military-standard chemical agents. The XM27 mask was effectively a green silicone M17, while the XM28 was a totally new design. Experience in field use in Vietnam showed the XM28 to be superior in design, comfort, and storage; so, after four revisions, the XM28E4 was adopted as the mask, riot-control agent M28 in 1968. Many people refer to this mask as the “grasshopper” mask. The M28 was widely procured (up to a million examples) and surplused them to many police departments after the war. In 1976, the M28 was declared obsolete.

SOG teams wore the XM28 on their STABO or M56 harness as riot control agents such as CM-DM gas & CS gas were often used during missions.