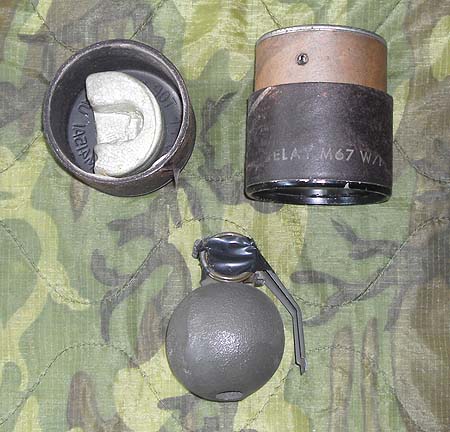 The M67 grenade is a fragmentation hand grenade used by the US armed forces and Canadian forces – where it is referred to as the C13. The M67 is a replacement for the M61 grenade used during Vietnam and the older MK2 “pineapple” grenade used since World War II.

The M67 can be thrown about 40 meters by the average soldier. It has a 4.2 second fuse that ignites explosives packed inside a round body. Shrapnel is provided by the grenade casing, and produces a casualty radius of 15 meters, with a fatality radius of 5 meters, though some fragments can disperse as far out as 230 meters. Its effectiveness is not just its blast radius, which measures approximately 45 feet (13.7 m), but shrapnel that embeds itself into objects and people up to 700 feet (213 m) away from the blast.