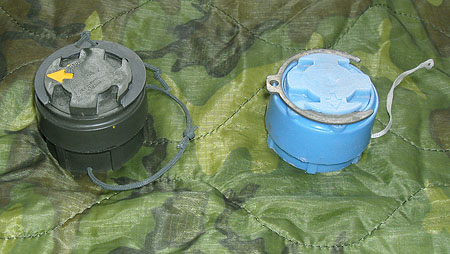 M14 Anti-personal Mine “Toe popper”. The M14 mine is a US small anti-personnel landmine first fielded in the late 1950s. The M14 mechanism uses a belleville spring to flip a firing pin downwards into a stab detonator when pressure is applied. Once deployed, the M14 is very difficult to detect due to its mainly plastic design. Because of this the design was later modified to ease mine clearance via the addition of a steel washer, glued onto the base of the mine.

In order to activate the M14, the base plug is removed and discarded and a stab detonator is screwed into the base of the mine. Then the mine is placed into a shallow hole in the ground and the pressure plate is carefully rotated from its safety position to the armed position using the special arming spanner supplied in each crate of mines. Finally, the U-shaped safety clip is removed from the pressure plate and discarded. At this point, the mine is fully armed.

The top of an M14 has a simple arming indicator (a yellow-painted arrow) on it which can point to either A(rmed) or S(afe), giving a clear indication of its status. When the arrow points to ‘A’, the M14 will detonate if stepped on. Disarming the M14 requires the arming steps to be performed in reverse. However, due to the possibility of a booby trap or some other type of anti-handling device being fitted underneath, it is often standard demining practice to destroy landmines in situ, without attempting to remove and disarm them.

The M14 has not been in active US service since 1974. However, the USA retains a stockpile of 1.5 million mines held in reserve for emergency use in Korea. This mine has been widely used by various countries, so uncleared minefields containing M14s do exist. Additionally, several copies of the design have been manufactured locally by countries such as India.

Dimensions:
56mm (Diameter), 40mm (height)
Weights:
0.936kg (mine), 0.029kg (explosive content – Tetryl of Composition B)
Material: The body is constructed of plastic but it has a steel firing pin.
Explosive: (Type)
Fuse & Activation:
When pressure is applied to the pressure plate the spring loaded firing pin is released to strike the cap firing the mine. Pressure: 9-16kg