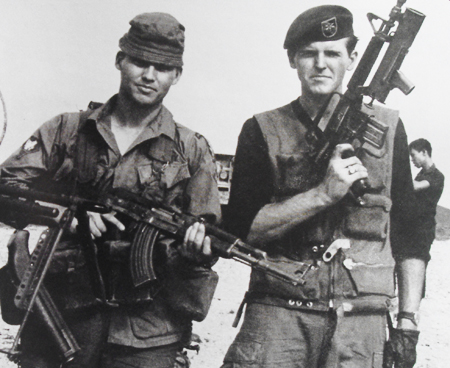 Lynne M. Black jr on the right holding an XM148 and XM177 combination and wearing a
1-0 vest 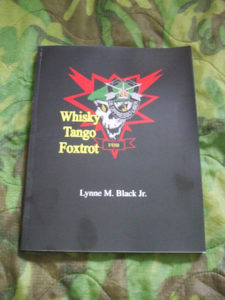 the front of the book, looks like the SOG notebooks I have seen in Paul Miraldis war roomThey say the history of wars is written by the victors. It has been my experience, having read uncounted numbers of books on military history written by all sides of a conflict, that this is not true. In fact, I have found that warriors, regardless of which country they fought for, tend to write “ground truth” more often than historians. Unfortunately, it is true that all-too-often, military history is thereafter modified by historians to fit what is now the terminal disease infecting our country: political correctness. The reason books like Whisky Tango Foxtrot need to continue to be written by the warriors, is for the preservation of that ground truth which no amount of political correctness will ever be able to change. Of course, it doesn’t hurt the historical record that so many warriors are also great storytellers and writers who don’t give a flip for political correctness. 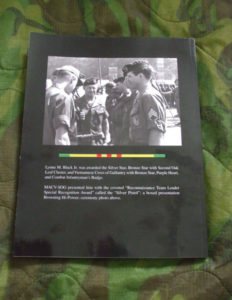 Lynne Black is one of those warriors who has added one more piece to the puzzle which was known as MACV-SOG and the secret projects that fought the silent, bloody contacts across the fence in the Second Indochina War. His details of a Saigon Headquarters debriefing by Chief SOG, Colonel Steve Cavanaugh, are the first, in-depth recorded recollections of one of those taut, sometimes combative, sessions between the desk jockeys and the men whom they sent, all-too-often, to their deaths. His narration of the events which a History Channel program labeled “The Last Stand of RT Alabama,” will immediately immerse the reader in what it meant to “win” The Lottery at FOB 1. The Target Area encompassing the crossroads of Routes 92 and 922, best known by the one name that to this day will conjure images of death and destruction to any recon man who ever ran there: Oscar Eight; was the “prize.” That aspect of the book is sufficient to make the reader become glued to the pages, as the recon team faces what will eventually be revealed to be very, very long odds. 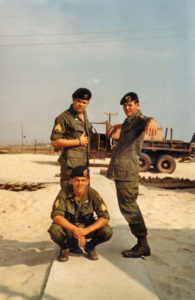 The book is not simply about running and gunning, but also contains some intimate insight into the mind-set, the motivations, of these young men thrust into situations which few readers will ever come to understand. The fact that Black clearly states his initial motivation to return to Vietnam for a second tour does not mean that it truly reveals what will eventually be recognized by some readers as the great “game” – the subconscious need to feel the rush of these missions. In what can only be called an existentialist bar scene, the “liar’s dice” played by the veterans of cross-border missions is a reflection of the “game” played for real by the teams on the ground in Laos, Cambodia, North Vietnam and in the DMZ. A careful reading of that chapter reveals much about the unwritten code of survival that was passed from veteran recon man to the new guys and will certainly draw the inevitable comparison to Remarque’s All Quiet on the Western Front.

Black also keeps the reader interested in his narrative by the generous use of some greatly humorous stories of the relationships between the men of recon company, their “little people” and with his adventures in the rear. Although in some instances (see the Chapter dealing with “Sean Flynn”) he leaves his readers wanting more answers (whatever happened to Bucky?) to some interesting side trips on which he leads us, it is fair to say that regardless of the destination, it will be memorable. Despite this very small criticism (“I gots to know” – to quote from Dirty Harry) my unquestionably favorite Black Op involves his experimentation with an unorthodox method to successfully capture a North Vietnamese Army POW. If that little episode does not put a smile on your face, you should check your pulse.

Much of the book involves Black’s inner reflections on life and his developing relationship with the men of FOB-1, as a result of which he reveals a great deal of himself. His suddenly tapped ability to react calmly, think strategically and lead with confidence in the middle of a fight for life is a superb study of that which warriors recognize as “the great question” which will only be answered when a man is actually placed in that situation. No amount of psychological screening or training can predict which of these men will step up and perform – – – mission after mission. This may not be the first book to deal with that eternal query, but it certainly goes a long way to show us that there is only one way to answer it.

I enjoyed the ride and am comfortable in predicting that if you are the sort of reader who prefers that his history have a face, introduce yourself to Blackjack and learn what it was like to be a young Spec 4, facing Binh Tram 611 on October 5, 1968. History will come alive.