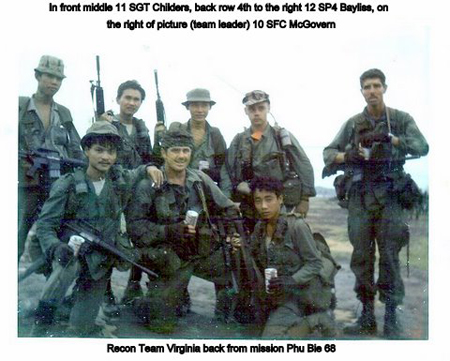 We have been speaking to (Ret) Msg John C. McGovern who served in the US Army from 1958 to 1979. He started his Special Forces service in 1964 and served 2 tours in Vietnam. When he first went to Vietnam in 1965, he served on 2 different A Teams. he then returned to the States in 1967 and went back again in Jan of 1968 to the battle of Khe Sanh with SOG. I started out as a one-one on a recon team then took over as a one-zero when his team leader left. In June of 1968, (when they closed out Khe Sanh) he was sent to Phu Bie and was placed in charge of a Hatchet Force Company. Later on he was assigned as the one-zero of RT Virginia untill just before he came home in Jan 1969.We have also been lucky enough to get some period and current photos from (Ret) Msg John C. McGovern and these are displayed here for the first time. Please respect (Ret) Msg John C. McGovern’s copywright on these images. I have tried to put the photos in chronological order.

Modern Forces: What made you join Special Forces and then apply for SOG, did you know what it was before you joined?

(Ret) Msg John C McGovern: When I returned to the states from Germany in 1962 (John joined the US Army in 1958), I was assigned to the 1st. Ranger Battalion as a canvas repair man. The 1st. Ranger battalion was the US Army Ranger School. I was assigned to the Florida phase, which the swamp, jungle, and surf training. I always wanted to be in the infantry so that worked out good. I met Sfc Pierre and Ssg Lehew who Took me under Their wings and showed me what I needed to know to pass Ranger School.

After Ranger School, I was promoted to Sgt and reassigned as an instructor. Later Ssg Lehew decided that we all should go to Scuba School, so we did and passed it. Then Lehew said that we should apply for Special Forces School. I had never heard of it but I was game. All three of us applied for it but out of 40 or 50 personel who took the test for acceptance only 3 of us passed. Lehew, another infantry Sgt and myself. I went to Jump School then to Special Forces Training. Upon graduation, I went to the 7th. Group and Lehew went to the 5th. Group. Later that year, Lehew and I both went to Vietnam. I was assigned to an A Team at An Long and he was assigned to the 4th. Corp Mike Force. In the summer of 1965, I was reassigned to Phu Quac Island Team A-427. We were having a lot of trouble with the VC so we asked the Mike Force to come down and give us a hand. When they showed up, Lehew was with them. I asked my Team Sergeant If I could go out with him and he told me no that I was to stay on the airfield with a reserve company in case they got in trouble. They did and Lehew, Gertanner and a number of vietnamese were killed in an ambush. They call for a chopper to get their dead and wounded out. When the choppers got back I was helping unload the dead. I grabed a boot and pulled it out and it was Lehew. My team Sgt help me put Lehew in a bodybag and then told me to take my company out and escort the Mike Force back to camp.

As for applying for SOG, I was at Fort Bragg NC. instructing in the officers Special Forces Course. I didn’t care for it and I wanted to go back to Vietnam so I called Mrs “A” in Washington and told her I wanted to go back to Vietnam and she said the only opening she had was with SOG. I had heard rumors about it but that was all. I told her I would take it.

Modern Forces: What kept you and the other team members going over the fence knowing the odds were so stacked against the teams?

(Ret) Msg John C McGovern: What kept us going over the fence? Pride in ourselves and our job after all, we were Special Forces and if I refused I would not be able to look anyone in the face again. We felt we were doing a good job at disrupting the enemy and getting intelligent information. 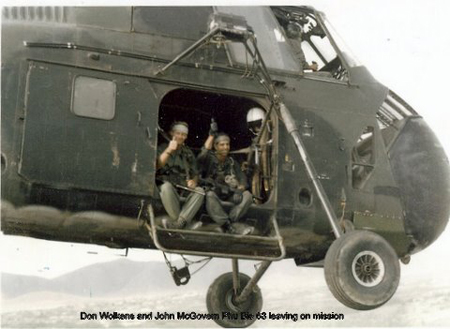 (Ret) Msg John C McGovern: The first team I was asigned to was at Khe Sanh (FOB 3). I arrived on the 12th. Of Jan 1968 I was assigned to Sfc Pross’s team as the one one to take over as one zero when Pross left. I do not recall the name of the team and have contacted him trying to find out, and he cannot remember either. It was a Montagnard (Brew) team. When Khe Sanh closed out, I was assigned to Phu Bai and farther assigned to the Hatchet Force. We were called the Red Devil Battalion. Each company was about the size of a platoon with a Lieutenant in charge.

As I had no Lt., I was the company commander. They were Cambodians. The last couple of months, I was assigned to RT Virginia as the one zero and they were Vietnamese. At Phu Quac we had Nungs and Vietnamese and at An Long, we had Vietnamese.

Modern Forces: Did any of them make it out to the States and if so have you ever been in touch?

(Ret) Msg John C McGovern: None of The people I worked with made it out to my knowledge. I know Cowboy off of Tilts team made it out and have seen him at the reunions.

Modern Forces: Did you have a weapon choice or preference? 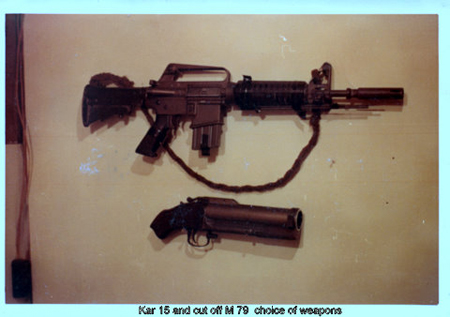 (Ret) Msg John C McGovern: I carried my M79 on a snap link on my web harness, and the rounds in an ammo pouch.

Modern Forces: Did you or your team ever carry any foreign weapons, AK47 or RPD? And if so how were magazines/drums/belts carried?

(Ret) Msg John C McGovern: Yes, sometimes I had my pointman carry an AK-47 with the 30 round magazines carried in a NVA ammo pouch. That way it would give him a little extra time in case he ran into someone.

Modern Forces: Did you have a standard equipment set-up in your team?

(Ret) Msg John C McGovern: Yes, 5 meals of rations for 5 days, 21 magazines for the CAR 15 with 5 to 10 small boxes of 20 rounds each in pack, 4 hand grenades, 1 claymore mine, 3 M19 toe poppers, handcuffs for any prisoners, can of pepper for dogs, Kbar knife, yellow panels and mirrors and 2 smoke to signal the aircraft, and any thing else the was needed for the mission.

Modern Forces: Did your team have any unique traditions or quirks in its equipment set-up?

(Ret) Msg John C McGovern: The only unique tradition that I remember is they would not go out in an uneven number of personnel, it had to be an even number.

Modern Forces: Empty mags…after emptying a mag during contact did you guys swap it back into a pouch or shove the empties down the front of your shirt? When training we favor the latter when re-enacting and its what the British Army tend to do?

(Ret) Msg John C McGovern: Empty mags, if you had time you put it back in the pouch if not it went on the ground. Some of us taped 3 mags. together, one up and 2 down and all you had to do was turn them over. The only problem with that as we found out later was that it weakened the mag. catch so we had to stop taping them together.

Modern Forces: Did you carry a side arm and if so how was is carried, you often see them in books but can’t seem to see any holsters (hip or shoulder) in the pictures I have?

(Ret) Msg John C McGovern: Yes, I did carry a side arm. A Browning 9mm in a hip holster.

(Ret) Msg John C McGovern: Yes I have seen it used also some of us just wore jungle fatigues that had been dyed black with no patches or name tags, or used the tiger striped fatigues.

Modern Forces: I have read reports that SOG and 46th Special Forces Company used early forms of night vision equipment, did you ever use or see any use of night vision or other hi-tech devices in use?

(Ret) Msg John C McGovern: The only place I saw night vision equipment in use was at Khe Sanh. We had the star light scope. We did get a pump M79 in for our use and also a rocket pistol to test out. Other than that we had access to just about any type weapon we wanted to include the British Sten with a silencer, Swedish K with silencer and a number of others.

Modern Forces: When at Khe Sanh during the siege what missions did SOG undertake?

(Ret) Msg John C McGovern: During the siege at Khe Sanh all we did was local insertions and patrolling. We had to go out at night for listening post and ambushes. One team was sent out to help get the survivors out of Lang Vie which was just down the road from us. Other than that we manned the trenches. 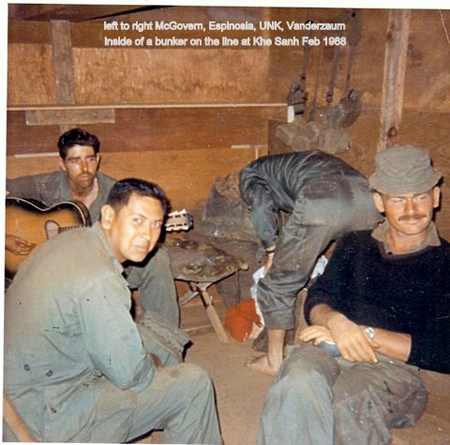