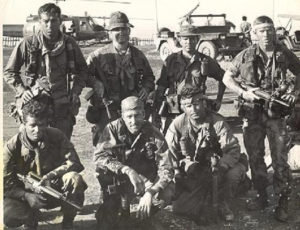 We have been lucky enough to be in contact with three veterans of MACV-SOG, they have been a source of valuable information and validation of elements of our living history display. On this page you can see excerpts of interviews aimed at getting our displays as correct as possible with the following SOG verterans; 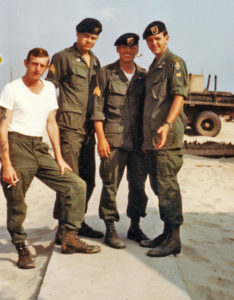 Modern Forces: What knife did you use, looks like a Kabar?
John “Tilt” Stryker Meyer: Yes, I used a Kabar

Modern Forces: You had a few frags high up on your harness, were these taped on using black electrical tape?
John “Tilt” Stryker Meyer: Yes

Modern Forces: The person next to you in the photograph (I think an indig team member) is carrying an Ak47. how did they carry magazines for these? in chest rigs? or pouches?
John “Tilt” Stryker Meyer: Both. We ran our point man later dressed as NVA and on page 204 of my second book there is a shot from the same line up one of our indig, Cau, he’s carrying M-60 ammo for that mission;

Modern Forces: are you wearing a Survival Ax in its canvas holster, like this link. http://www.olive-drab.com/od_edged_weapons_tools_lc14b.php
John “Tilt” Stryker Meyer: No. Mine was very similar, with the exception of the handle. My canvas pouch said it was a Survival Tool Kits, Airman’s, Frank & Warren, Inc. Type 1/Mil-s-8642C 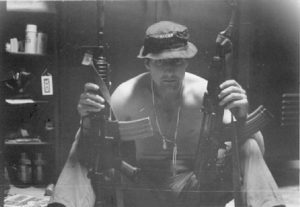 Lee Burkins in his team room wearing his recon boonie.

Modern Forces: Did you ever carry an AK47 and if so how did you carry the magazines?
Lee Burkins: Mike Kinnear who was my One Zero for a short while, carried an AK47. He used the Chicom vest and put other clips into his indige ruck sack.

Modern Forces: Again not sure if any your team members carried an RPD but we were wondering how ammo was carried, pictures I have seen show normal canteen pouches being used but an RPD mag wont fit
Lee Burkins: I never carried the RPD but Wollcolf (RT Washington) did. He carried drums. I believe he had a hand made pouch he tied onto his gear to carry other drums and additional belts of ammo in his rucksack.

In firefights (mine anyways) when running and fighting, clips (20 round) were usually dropped and left where they lay. When fighting in a defensive position we dropped them down our shirt.

I used canteen covers to carry baseball grenades (I think I could get four into a pouch??) I carried a total of 10 baseballs, 2 WP grenades, twenty-one 20 round magazines (which we only put in 19 to prevent jamming and the last few rounds were tracers to let me know I was about to empty the mag). 30 round mags for the CAR15 were very scarce. I had only one and I filled it (30) with hollow points, which had more knock down power then hard nose. (I had ammo sent to me from the states). I also used the canteen covers to carry the 20 round mags. I taped a ‘tail’ of electrical black tape onto the end of each mag so I could easily pull it out of the canteen cover because initially the mags were squeezed into the cover. I carried a total of nearly 500 rounds of 5.56. I carried two CN grenades and two smoke grenades (attached to web belt and a ‘golf ball’ grenade attached to my webbing. Take a close look at the ‘One Zero’ team picture and you can see the ‘golf ball’ on my webbing. And a claymore inside the cover flap of my customized radio back pack.

Modern Forces: Did you ever carry a back-up weapon or side-arm?
Lee Burkins: I would carry a few extra magazines for the CAR-15 rather than a handgun. I carried a buck knife. Woodsman. 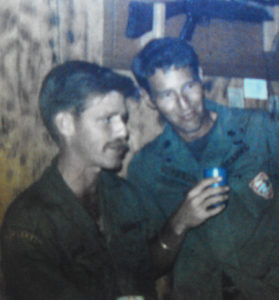 John Good (on right) with Les Dover of RT Hawaii

Modern Forces: Did you ever carry an AK47 and if so how did you carry the magazines?
John Good: As to AKs – I did not carry one nor did anyone on my teams. However, the teams that I recall carrying AKs went as NVA teams, wearing NVA uniforms, pith helmets, etc. They used chest packs to carry the magazines. Generally teams tended to carry similar weapons, i.e. AKs or CAR-15s, etc. Easier using a single type of ammo. Exceptions were with special purpose weapons such as RPGs and RPDs.

Modern Forces: Again not sure if any your team members carried an RPD but we were wondering how ammo was carried, pictures I have seen show normal canteen pouches being used but an RPD mag wont fit, and I have tried quite a few times even cutting the pouch etc. We had a theory…might it go something like this… – Prior to contact – RPD with drum attached (easier for transiting boonies, stealth etc as opposed to having a 3ft length of rounds jinking about the place) – First contact – belt in drum expended – Reload of second belt directly into feed mechanism and so on – After break contact and reorg – reload fresh belt into drum and carry on patrol
John Good: PDs – The way you described it is pretty accurate. (a) Carry a full drum attached to the RPD (b) When expended, feed directly from a canteen cover – generally held a 100 rd belt (c) After a heavy contact it was more likely you would be extracted as your cover and likely your mission was blown so would be no reason to reload drum in the field.

Modern Forces: empty mags…after emptying a mag did you guys swap it back into a pouch or shove the empties down the front of your shirt? When training we favour the latter and its what the British Army tend to do?
John Good: have to say that in the middle of a fire fight I rarely worried about saving my mags. I was more concered with changing them out quickly and keeping the rate of accurate fire up. However, with 30 rd mags I would make an extra effort as they were hard to come by and we frequently bought our own as they were difficult to obtain thru regular supply channels. If I was able to save them, it was easier to stick them inside the shirt. 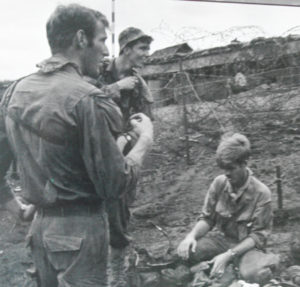 John Good (on left) with unknown man and Les Dover

Modern Forces: Was their anything about your team that was unique, any quirks?
As to your other questions your gear looks pretty good. Uniforms varied a good bit depending on personal taste and were frequently “tailored” to reduce the chance of excess material snagging in the brush. You have a pretty good picture on your site although in addition to black spray paint we also used green and/or brown if available. Interestingly enough I found a source for the leggings you show on your site – an Army/Navy store in Little Rock, AR. I brought a bunch back for our team and pretty soon had my parents going down and buying all they could get from the store for other teams. They were pretty widely used in after that.

Unique? All the teams shared techniques and tactics. One thing we did and placed a lot of emphasis on was not firing in bursts and not firing from the hip. Only the point man was authorized to fire full auto from the hip in the initial moments of a contact. Everyone else was required to fire from the shoulder in bursts. We spent hours practicing this and going thru IA drills. Does not sound like much these days as it is commonly taught, but in those days it was far less common.

I do have pictures and will look thru them if you like. After I got out in ’72 I went back to RVN working in the Embassy and stayed to the end. I recruited some of my old ‘Yards to work in a program and got some of them out when things went down the tubes. I am not currently in contact with them but am trying to reach them. I heard that my old 01 is in Arizona and some others are in Dallas.

Saw your bit on the Halo mission. Moye and I were training together (he was on my team) for Halo and I was injured. The equipment they carried on the mission (Uzi’s, chest packs, cut down indigenous packs, etc) were things that Ruff and I had “brainstormed” on. Newman Ruff was my original 10 when I first went in-country.