MACV-SOG Veterans Stories: I Was There:
John “Tilt” Stryker Meyer, One Zero of Spike Team Idaho 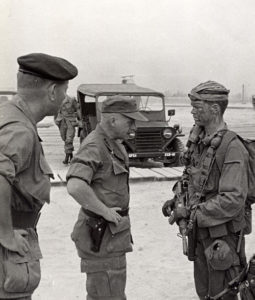 In November 1968 I was team leader (one-zero) of Spike Team Idaho. John “Bubba” Shore was my assistant. We were running top-secret missions for MACV-SOG (Military Assistance Command Vietnam — Studies and Observation Group) out of FOB-1 (Forward Operating Base) in Phu Bai, South Vietnam.

We’d been detailed to assist FOB-6 near Ho Ngoc Tao. Intelligence estimates had NVA strength across the Cambodian border at more than 100,000, and the terrain for our first target was flat as a pancake. The mission: Locate one of three NVA divisions which had disappeared.

As our team sat at the launch site in Bo Dop, a chopper landed with a Thanksgiving feast, complete with hot turkey, cranberry roll, gravy and mashed potatoes. As we finished overindulging, Air Force Hueys arrived to slip us into Cambodia.

The insertion was slick and quick. We flew into the target area at treetop, full speed. We were so close I was worried about branches hitting my feet.

Because this was an area where FOB-6 teams had been taking serious casualties recently, the command and control chopper remained airborne a few miles away, far enough where NVA troops couldn’t hear the bird but close enough for radio contact.

Special operations teams could only go 10 klicks into Cambodia. If attacked by NVA troops, we were “forbidden” for using fixed-wing assets–assets we used heavily in our Prairie Fire AO, assets which kept us alive when surrounded by hundreds of NVA troops.

Not only were the rules different in Cambodia, but instead of the dense jungle foliage of Laos, it was more like the thinly wooded central New Jersey countryside I had hunted a few years earlier. With no double canopy, we could see sunlight. And we could see straight ahead, through the trees, more than 100 yards.

During our first break, because the vegetation remained thin, I had Phouc, our point man, and Bubba put five-second fuses in two claymores–the openness of the wooded area made me hinky. Then we moved on.

Sau, my counterpart, spotted smoke and we moved toward it. Sau said, “No VC,” and we continued forward. As always, Sau’s reading of the NVA was correct. We were in an NVA bivouac area, the smoke originating from a fading fire.

I started taking pictures, but Sau was nervous. His eyes were getting bigger. His speech was quicker. Heip, my interpreter, was getting nervous from talking to Sau. Sau was quick, smart, agile, and fearless. He could smell the NVA and knew how they worked.

I wanted to see if we could find a cache and suggested going further west.

I must have had an incredulous look on my face, because I couldn’t hear anything, and I certainly didn’t see any NVA troops.

Sau turned to Heip, now more than a little agitated. Before Heip said a word, I turned to Bubba, who was tail-gunner in our formation. I signaled our point man to head back to our LZ.

Heip explained: “Sau say this is enemy camp. We’re beaucoup lucky because no VC here. But, he found hundreds of fresh footprints going there,” he pointed south. As Bubba passed me, I told him to give me a claymore mine with a five-second fuse.

We were in Cambodia. Alone. With no fixed-wing aircraft. And Sau’s eyes were as wide as saucers.

As we moved forward, Sau backpedaled, hastily covering our tracks. We had only gone a short distance when Sau hissed: “Beaucoup VC! Beaucoup VC!”

I could see pith helmets coming from the south. I radioed the C&C helicopter, told them to return with Cobra gunships and to pick us up at the primary LZ, ASAP! C&C said they’d have assets on site in 10 minutes.

I fired my M79 in the NVA’s direction, two high bursts, which slowed them down for a few seconds. I yelled to Bubba to move out. The race for life was on.

Sau hissed to Heip and pointed north. Damn, there were pith helmets and NVA uniforms coming at us from the north, too–at a dead run. The elements from the south were from the division which had left the base camp, and the NVA from the north were moving into it.

Sau and I placed the first claymore behind a tree and ran. The NVA were now running and shooting wildly.

At the LZ, heip placed another claymore toward the charging NVA. To the north, Bubba rigged a claymore with a contact detonator on a trip wire. As the tide of pith helmets flowed toward us, Bubba and I opened fire with our M79s, and Sau and Heip opened up full-auto with their CAR-15s.

More NVA emerged from the smoke and tripped Bubba’s claymore. The rest of the team jumped on the chopper and I fired the last claymore as a wave of NVA troops got in front of it. The blast gave me a few seconds to make the Huey.

As we pulled out of the LZ, several NVA burst from the woods, surprised to see the choppers. One NVA tried to stop, his boots kicking up clumps of mud as he tried to bring up his AK from port-arms.

I watched the mud kicking upward toward the rotors as the doorgunner and I hit him in the chest with a burst, stopping him suddenly–so suddenly he reminded me of a cartoon character whose head and feet moved forward while his chest and stomach were slammed with lead, driving him back into the woods.

When we landed at Bo Dop at 1400, the Air Force pilots invited us for Thanksgiving dinner. We were starved. The narrow escape from Cambodia was sobering. If the Air Force had delayed a few more minutes…

As we rolled out of the mess hall, one of the SF launch site people said we had to get back to FOB-6 ASAP for debriefing.

I reported directly to the CO, who said, “Give me a thumbnail description of what happened, so I can send that to Saigon, then we can eat our Thanksgiving dinner and do the detailed report afterward. That makes it two Thanksgiving dinners and one mission. Not bad for a day’s work,”

“Make that three dinners,” I laughed.

Bubba and I ate the third dinner. But this time we passed on the second helping and thanked God for the U.S. Air Force.