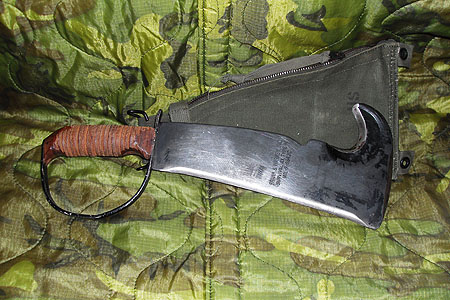 The LC-14-B Woodman’s Pal survival axe was originally a tool for forestry or agriculture, but quickly earned a place as an outstanding military implement. The well designed and balanced blade was first procured in World War II. The LC-14-B Woodman’s Pal served through the Vietnam War and is still part of the military inventory of edged tools in the 21st Century. Photos of John S. Meyer, One-Zero of RT Idaho show him wearing a Survival Ax. 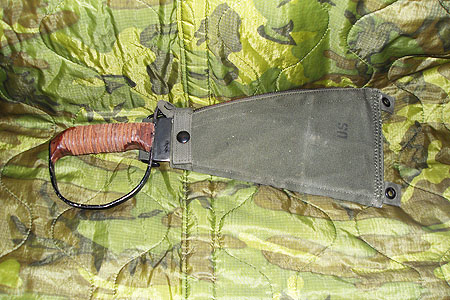 During the Vietnam war, the Woodman’s Pal was designated as the Type IV Survival Ax, the main component of the “Tool Kit, Survival, Type IV” issued as NSN 8465-973-4807 under specification MIL-S-8642C. It was issued to aircrews, helicopter crews, and for other survival purposes. For aircrew survival, the same tool was issued as the Global Survival Kit, SK-NA-2 Aircrewmans. In addition to the tool itself, the kit included: 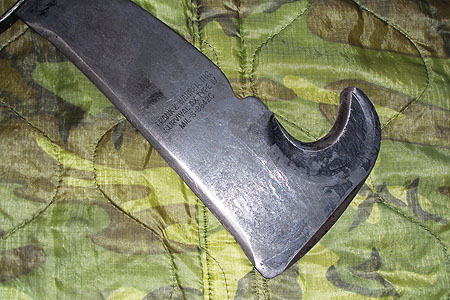 During this time period the tool was manufactured by Frank & Warren, Inc. The blade itself and the case will be so marked. The base of the case had two grommets for tying it to a leg or pack so it will not bounce. Early cases were cotton duck but were changed to nylon like other Army equipment of the Vietnam era. The grip was made from a leather washer stack and also has an extended cross guard that formed a knuckle-bow with the butt to protect the users hand. 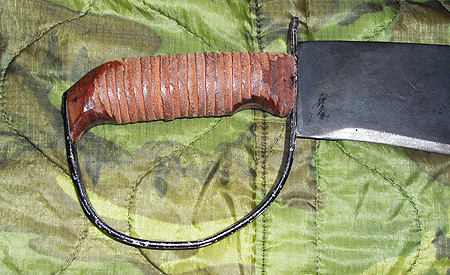