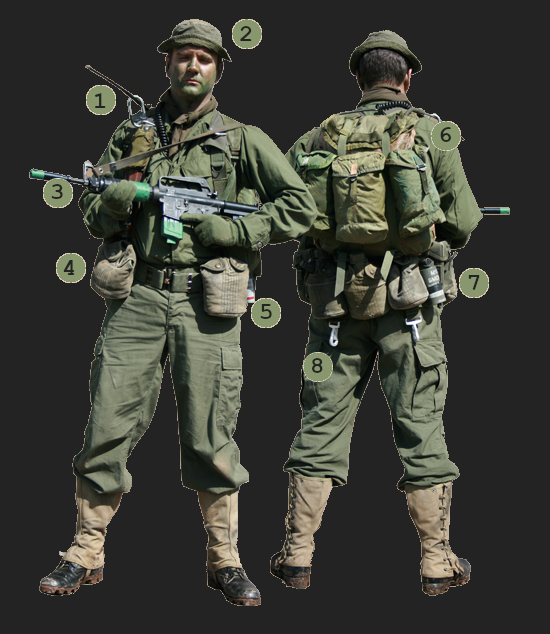 Our recent photo shoot was inspired by and is in tribute to RT New York. We don’t know of any photos of John Blaauw so this is a composite of a typical SOG load-out. Note that in this picture a STABO harness is used and this would be incorrect if the rest of the team were using M56 Suspenders.

1: The uniform is standard US Jungle Fatigues.

2: His headgear is a locally made boonie, this would have had a signal panel sewn into the top to help in helicopter extractions.

3: The weapon is an XM177E2 or CAR-15 as it was known at the time, this was the “standard” SOG weapon and they were the only unit to be fully equipped as such. You can see here that the muzzle is taped to prevent brush and dirt getting into the barrel.

4: CAR-15 magazines were carried in Canteen Covers as 7 magazines could be squeezed in if the lining was burnt out. Lee Burkins, One-Zero of RT Vermont told us “I used canteen covers to carry baseball grenades, I think I could get four into a pouch?? I carried a total of 10 baseballs, 2 WP grenades”

5: This small grenade was an experimental CS Gas grenade called the XM58 that was used in breaking contact with the enemy as they would be unlikely to be carrying gasmasks.

6: As the One-Two our man is carrying the radio, in this case a PRC-25, in some teams the One-Zero would carry the radio to have direct contact with air-support. The handset is placed in a plastic bag to protect from moisture. The radio is shown being carried in a US Tropical Rucksack.

7: A single M56 Universal Ammo Pouch is carried on the belt, this was often used to carry Escape & Evasion, medical or a Survival kit

8: In this picture our team member is wearing a STABO extraction harness, this was used instead of the M56 Suspenders but could be used for “string” extraction by helicopters. These were introduced in 1969 and replaced the Hanson and McQuire rigs then in use. The straps hanging from the rear of the LBE would be passed between the legs and attached to the front to provide a secure harness for extraction.