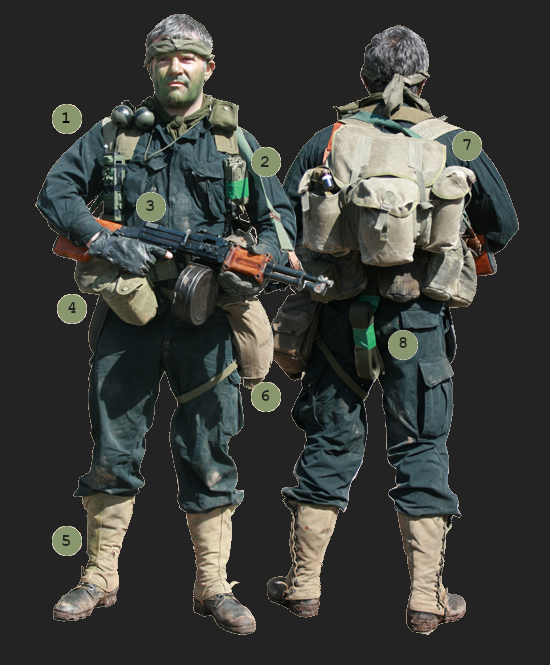 Our recent photo shoot was inspired by and is in tribute to RT New York, this impression is inspired by a number of different photos of One-One Ed Wolcoff from his time in SOG.

1: The uniform is standard US Jungle Fatigues dyed black. These served two purposes; they were good camouflage in dark triple canopy jungle and they might fool NVA soldiers that the wearer is Viet Cong from a distance, giving valuable seconds in a fire fight.

2: On his harness he has the AN/PRT 4 and AN/PRR 9 Squad radio, these could be used for inter squad communication.

3: The weapon is a cut down Soviet or Chinese RPD, a modified weapon unique to SOG. Here is what Lee Burkins, One-Zero of RT Vermont, told us about the RPD “I never carried the RPD but Wolcolf did. He carried drums. I believe he had a hand made pouch he tied onto his gear to carry other drums and additional belts of ammo in his rucksack.”

4: RPD belts are carried in canteen covers along with grenades, again we had some feedback from Lee Burkins about how he carried grenades “I used canteen covers to carry baseball grenades, I think I could get four into a pouch??, I carried a total of 10 baseballs, 2 WP grenades”

6: Photos show Wolcoff carrying an M17 Gasmask as opposed to the smaller XM28 Riot gasmask, this was carried on the left hip and secured around the thigh. They were used to protect against CS gas used to break content with the enemy.

7: Shown in the photographs is the CISO manufactured Indigenous Rucksack. This CISO Indigenous rucksack was owned by SOG RT member CPT. Carleton Vencill. Vencill was a member of CCS in 1970.

8: Hanging from the load bearing equipment is the Hanson Rig, this was an early form of extraction device made from an A7A strap. These were used when extraction by helicopter was the only option, if a landing site was unavailable.