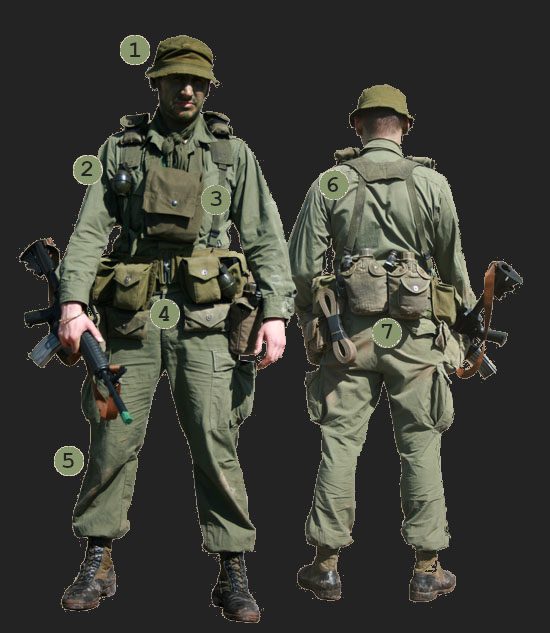 Our recent photo shoot was inspired by and is in tribute to RT New York, we used photos of John St. Martin before the mission to recreate his uniform and equipment that you see above, one interesting note is that he didn’t use a rucksack.

1: The boonie is a Vietnamese made version with a signal panel sewn on the inside.

2: An M26 hand grenade is attached to his M56 harness, the grenade ring would be taped to prevent snagging on jungle foliage.

3: John St. Martin constructed a small rucksack from a standard Claymore Mine bag, by separating the two pockets of the bag into individual pouches and halving the carry strap, you could create a a system with a two half claymore bags joined by opposite ends of a length of strap at each corner that was able to be worn over the shoulders. This created an easily accessible bag on both your front and back (back section not shown in photo) that was able to carry the supplies St. Martin required for his operations including a rolled up poncho attached underneath the rear bag.

4: John St. Martin chose to use a WW2 era BAR belt as way of carrying extra ammunition, this was a common choice for Special Forces personnel. The belt is held up by standard M56 Suspenders and the eyelets at the bottom of the belt were used to carry WW2 and Korean era first aid pouches and canteen covers.

5: The uniform is non-ripstop cotton poplin Jungle Uniform with no modifications.

6: The M56 Suspenders were worn prior to the issue of the STABO harness, extractions were affected using the Hanson Rig that can be seen hanging from the belt. Developed by FOB-2 One-Zero Bill Hanson. This method of extraction was the bridge between the Swiss Seat and the STABO Harness. The strap itself was no more than an “A7A Cargo Strap”. Hanson devised a method of using the cargo strap as a safer, more reliable method of helicopter extraction.

7: On the rear Canteen Pouch can be seen a pouch for the AT984 antenna. This is the pouch for the a multiple wavelength long wire antenna for the VHF low band radios like the PRC-25 and PRC-77. It provides more gain than the whips antennas or the RC-292 or OE-254 fixed station omni-directional antennas. It is an unterminated wire unlike the OE-303 half rhombic that uses a termination.