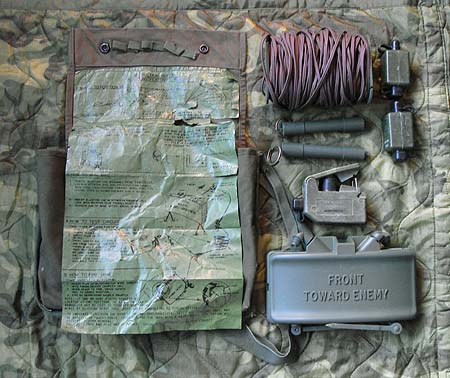 The M18A1 Claymore is a directional anti-personnel mine used by the U.S. military. It was named after the large Scottish sword by its inventor, Norman A. MacLeod. The Claymore fires shrapnel, in the form of steel balls, out to about 100 meters across a 60° arc in front of the device. It is used primarily in ambushes and as an anti-infiltration device against enemy infantry. It is also of some use against soft-skinned vehicles.

The M18A1 Claymore mine consists of a horizontally convex olive green plastic case (inert training versions are blue), which is vertically concave. The shape was developed through experimentation to deliver the optimum distribution of fragments at 50 meters (55 yards) range. The case has the words “Front Toward Enemy” embossed on the front surface of the mine. A simple open sight is provided for aiming the mine on the top surface. Two pairs of scissor legs attached to the bottom support the mine and allow it to be aimed vertically. Either side of the sight are fuse wells set at 45 degrees to the vertical. Internally the mine contains a layer of C-4 explosive on top of which is a matrix of approximately seven hundred 1/8 inch diameter steel balls (about as big as #4 buckshot) set into an epoxy resin.

When the M18A1 is detonated, the explosion drives the matrix of 700 spherical fragments out of the mine at a velocity of 3995 feet per second (1,200 m/s), at the same time breaking the matrix into individual fragments. The spherical steel balls are projected in a 60° fan-shaped pattern that is two meters high (6 ft, 8 in) and 50 meters (165 ft) wide at a range of 50 meters (165 ft). The force of the explosion deforms the relatively soft steel fragments into a shape similar to a .22 rimfire projectile. These fragments are moderately effective up to a range of 100 meters (328 ft), with a hit probability of around 10% on a prone man-sized 1.3-square-foot (0.12 m2) target (0.12 square meters). The fragments can travel up to 250 meters (820 ft) forward of the weapon. The optimum effective range is 50 meters (165 ft), at which the optimal balance is achieved between lethality and area coverage with a hit probability of 30% on a man-sized target. The weapon and all its accessories are carried in the M7 bandolier. An instruction sheet for the weapon is attached to the inside cover of the bandolier.

The mine and its accessories were carried in a specifically designed bag (see below).