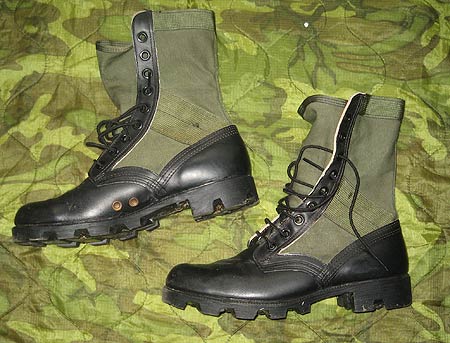 In the early 1960s, a jungle boot incorporating most of the improvements developed since the end of World War II was issued to U.S. forces personnel in Vietnam. In the improved boot, the upper was made of cotton canvas duck, with leather for the toe and heel, and nylon reinforcements for the neck of the boot. The new Jungle boot originally used a Vibram-type lugged composition rubber sole strongly vulcanized to the leather toe and heel. Water drains (screened eyelets) were added to the canvas top near the sole to quickly drain water from the inside of the boot. Removable ventilating insoles made of fused layers of Saran plastic screen, first invented in 1942, were later adopted for the issue Jungle boot. The insoles trapped air which was circulated throughout the interior of the boot during the act of walking; moist interior air was exchanged for outside air using the water drain eyelets. In 1968, after two additional years of testing with troops in the Panamanian jungles, the Panama sole was finally adopted by the U.S. Army for its issue Jungle boot. 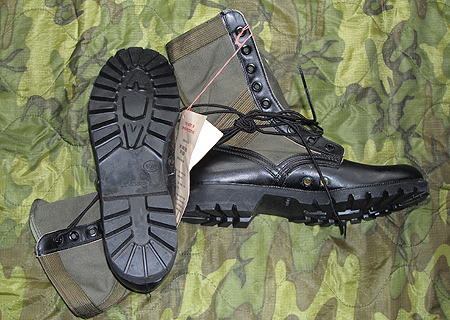 The US military jungle boot’s popularity extended beyond the US Armed Forces with Australian Army and New Zealand Army soldiers going to great lengths to get a pair of jungle boots from American troops to use alongside their standard-issue black leather General Purpose Boots (GP Boots). When the 1st Battalion of the Royal Australian Regiment (1 RAR) was deployed to South Vietnam and served alongside the US Army’s 173rd Airborne Brigade in 1965, many Australian troops were willing to trade their Australian Army-issue “slouch hats” for a pair of jungle boots from the Americans since the boots Australian troops were issued were of World War II vintage and were not suited to the conditions of Vietnam. Australian and New Zealand Special Air Service troops also made extensive use of American jungle boots during the course of the Vietnam War and they were very popular with the SAS troopers.

Sometimes SOG teams would grind the soles of the Jungle boots down to minimise the tell-tale tread marks or even wear Jungle Socks over the top when crossing trails to disrupt tracker teams.