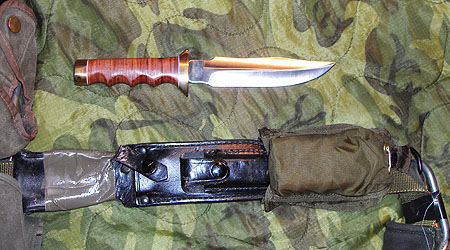 The SOG knives were made and issued to SOG  clandestine and cross-border Recon Teams (RT) and Spike Teams (ST) for their across the fence missions.

The original SOG Bowie was used by the Military Assistance Command, Vietnam Studies and Observations Group (MACV-SOG), an elite joint services military group designed for covert operations in the Vietnam War. This group was allowed to develop and purchase their own equipment for their operations, so they developed a knife that could cope with the harsh environments encountered in Vietnam, though a lot of recon teams said they rusted very quickly and wouldn’t keep an edge.

The SOG knife was designed by Ben Baker of the Counter Insurgency Support Office. CISO was formed in 1963 to provide “sterile” equipment to Special Forces in South East Asia. The knife was allegedly based on a 1916 Marbles Bowie that Ben Baker owned and was produced in Japan for $9.85 per knife. The knife was produced in two lengths, 6 and 7 inches, the latter being made specifically for SOG and 1,308 were produced in the initial batch. More orders were placed through the 1960’s including a large number of 6 inch knives that bore a serial number for control purposes (SOG knifes being sterile). Ben Baker also designed the sterile SOG Bolo knife, based on a South East Asian design.

SOG also made great use of private purchase knives such as Randall and Gerber but also the more common Ka-Bar and Airforce Survival Knife.

The knife you see here is a modern reproduction.