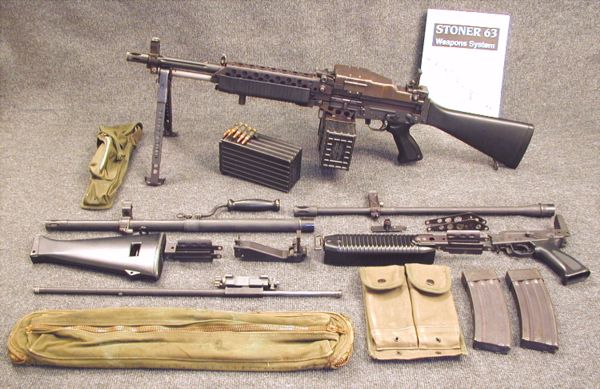 The Stoner 63 is a modular firearm system designed by Eugene Stoner and engineered by Jim Sullivan by scaling down the earlier Stoner 62. It was produced by Cadillac Gage and is also known by its US military designation Mk 23 Mod 0. The system was introduced in 1963 during Stoner’s time at Cadillac Gage, which manufactured the weapon until 1971. It is covered under U.S. Patent 3,198,076 .

The Stoner 63 was produced in several configurations, with 15 separate assemblies, which had limited parts commonality. These variants included a carbine, an assault rifle, and various light machine guns feed by both magazines and linked ammunition from the left or right. The gas system was mounted in different positions depending on the weapon’s configuration. The operating system operated by directly tapping gas from a port near the muzzle, using it to operate the forward-locking rotating bolt. The guns were complex and required high levels of maintenance to operate reliably, especially in the humid jungles of Vietnam where they made their debut. However, the Navy SEALs who carried them into combat showed that the Stoner 63 could be a very effective weapon. The barrel of each variant was easily removed, although this had little effect except on the machine gun variants. Due to the multi-role nature of the design the carbine and rifle versions were heavier than comparable weapons of the same type.

A special bayonet, the KCB70, was developed for this rifle by the German company Eickhorn-Solingen. Featuring a 7-inch (180 mm) long sawback blade with a clip-point and an integrated wire-cutter, it was inspired by Soviet bayonets for the AK-47. A highly successful multi-purpose tool that was a far superior field knife to the M7 bayonet, it evolved into the KCB77, a modular design that was adapted to many different assault rifles. This was used into the 1990s by Ireland, Australia, Indonesia, and many other countries as their standard issue bayonet.

In 1963, the Stoner 63 was sent to the US Marines for evaluation, where it made a positive impression with its light weight and high ammunition capacity. The Marines tested the gun for six months and submitted recommendations for improvements to the design—these included a stainless steel gas tube, a two-position fire selector with separate safety, ejection port dust covers and modifications to the belt feed mechanism. The upgrades were built into the Stoner 63A, which began production in 1966.

During 1967, the Stoner 63A system was field tested by Company L (Lima Company), 3rd Battalion, 1st Marine Regiment, 1st Marine Division. Riflemen were issued the weapon in the Rifle configuration, while officers and certain other personnel received the Carbine. The Automatic Rifle configuration was deployed on a limited basis in the squad automatic role, while Lima’s weapons platoon received both the LMG and MMG configurations.

In 1970, the US Army designated the Commando configuration XM207 and deployed it to select Army Special Forces units for evaluation. However, due to its complexity and high maintenance requirements (especially when compared to the new Colt M16), the design was rejected, and the project was dropped in 1971. Around 4,000 63 and 63A units were built in total. Most of them continued to see use aboard US Navy ships, under the designation Mk 23 Mod 0. However, by the late 1980s the Stoner 63 was completely phased out in favor of the new M249 SAW, and most of the remaining guns were destroyed. Today, surviving models number in the dozens.

A lasting contribution of the 63 project is the ammunition link used in the belt-fed variants – it was later modified to become the M27 link used in modern 5.56 mm machine guns like the M249. Robinson Armament Co. also produces the semi-automatic M96 Expeditionary Weapon System which, though technically different, was based on the Stoner 63 design, and thus has some of its features and configurations.

The most recent descendant of this line is the Stoner LMG produced by Knight’s Armament Company, which has significant changes from the older Stoner 63.

Stoner 63/63A Rifle: A standard assault rifle fed from below by a 30-round box magazine. Spent cases are ejected to the right. The cocking handle and gas system are mounted above the barrel. Unlike the belt-fed configurations, the Rifle fires from closed bolt. The rifle configuration was field tested by the USMC for a short period during 1967. It was eventually fitted with a light bipod that folded beneath the handguard.

Stoner 63/63A Carbine: The Carbine is similar to the Rifle configuration, but with a shorter barrel and a side folding stock. The carbine configuration was field tested by the USMC for a short period during 1967.

Stoner 63/63A Automatic Rifle: The Automatic Rifle is a closed-bolt rifle feeding ammunition from a top-mounted, 30-round magazine. The receiver is identical to the Rifle variants, but inverted, so that spent cases are ejected to the left. As the receiver has been inverted the cocking handle is now mounted underneath the foregrip. The front and rear sights are offset to the left to compensate for the magazine’s position. The AR does not have a semi-automatic mode. The automatic rifle configuration was field tested by the USMC for a short period during 1967. 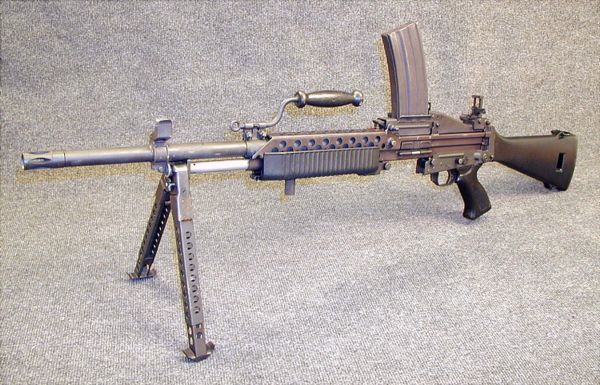 Stoner 63/63A Light Machine Gun: The LMG configuration fires from an open bolt and early versions fed from the left but the more common later variety fed from the right by linked ammunition kept in a 100-round plastic box. The receiver is identical to the Rifle variants, but inverted, so that spent cases and links are ejected to the left. The LMG has a quick-change barrel and a bottom-mounted gas tube. The LMG configuration was field tested by the USMC for a short period during 1967. 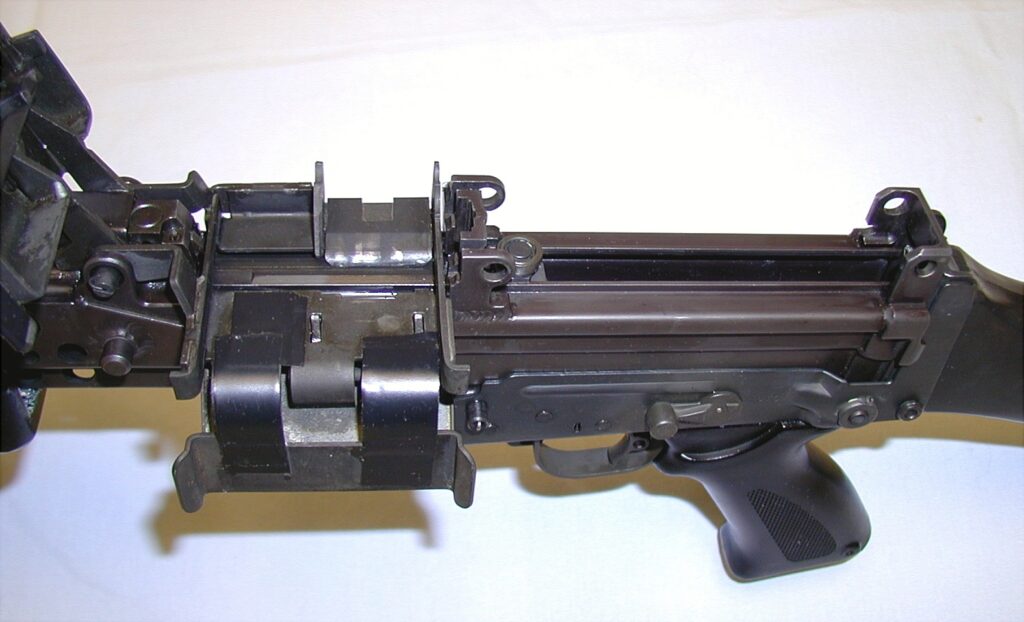 Stoner 63/63A Medium Machine Gun: Identical to the LMG configuration. The difference is that the MMG comes with a separate adapter than can be used to attach the weapon to an M2 or M122 tripods. The MMG configuration was field tested by the USMC for a short period during 1967.

Stoner 63/63A Fixed Machine Gun: Internally identical to the LMG configuration. Externally, the front sights, rear sights, foregrip and pistol grip are all removed. The trigger is activated remotely by a 24V solenoid. The FMG was designed for use with the Cadillac Gage Commando APC, but was never officially adopted.

Stoner 63/63A Commando: The Commando is a derivative of the LMG configuration. It is fed from the right by a 100-round drum magazine clipped below the receiver. The cocking handle is mounted underneath the foregrip for easier access. To save weight, the Commando eschews the quick-change barrel found on the other belt-fed configurations. This variant was used by some US Navy SEAL units in Vietnam. 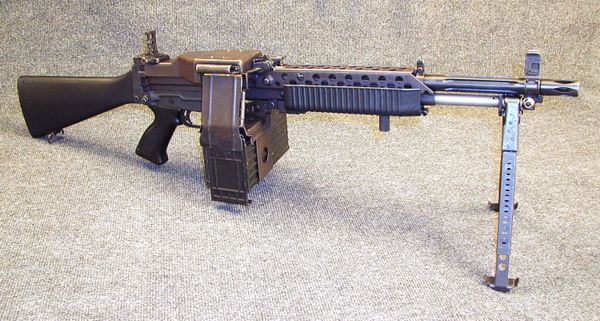 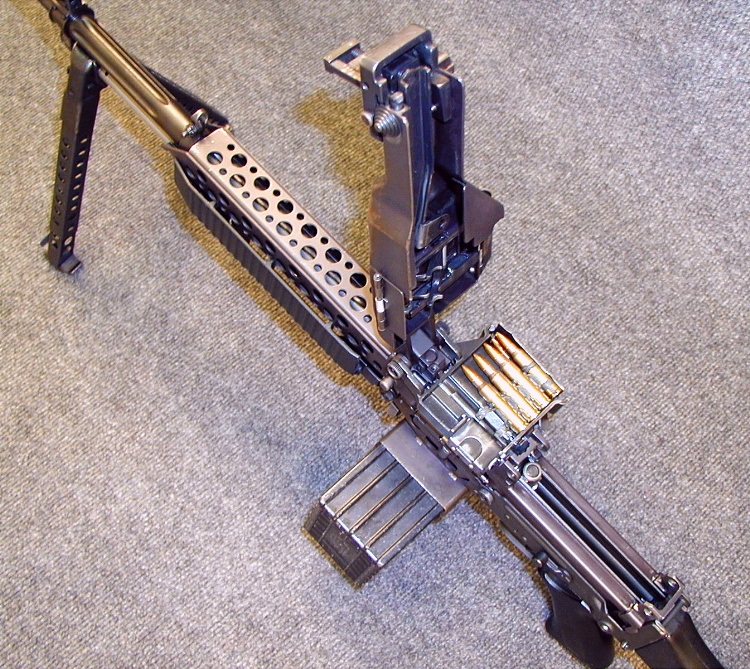 Stoner 63 Survival Rifle: The Survival Rifle was designed in 1964 to compete with the Colt Model 608 (Colt CAR-15 Survival Rifle) as an airman self-defence weapon. It is mechanically similar to the Rifle configuration, but has several external modifications made to fit into Air Force size constraints. These include a cut-down pistol grip, an absent handguard, shortened barrel and receiver, and a top-mounted cocking handle. The Survival Rifle does not incorporate the 63A upgrades. Only one prototype was ever produced – it survives to this day.