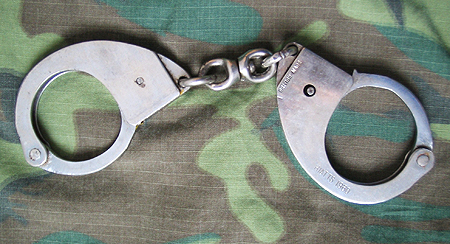 Handcuffs were used in prisoner snatches, a common intelligence gathering activity undertaken by SOG teams. Regular metal handcuffs (here you can see some 1960 dated ones) and zip-locks were used, as well as anything to hand such as a triangular bandage.

A prisoner snatch earned the US team members an R&R trip and Seiko watch and the Indigenous team members would receive a bounty payment. So it was a hard assignment but one that had its rewards. Prisoner snatches were very hard to plan and their was much debate as to the best method, explosives, poison darts and silenced guns were all tried.

Some words from SOG legend John L Plaster on the subject, taken from his book Secret Commandos; Behind Enemy Lines with the Elite Warriors of SOG

“Only the finest One-Zeros brought back prisoners, with the best technique a subject of unending NCO club debate. Some One-Zeros believed a snatch should be a deliberate ambush, employing a carefully placed gunshot or explosive charge to disable one NVA while gunning down his companions. They advocated everything from exotic Astrolite liquid explosive to suppressed .22 pistols. Other One-Zeros thought it better to pounce upon a lone NVA, if one could be found, and knock him into submission to avoid the chance of accidentally killing him. One team leader, considering police-style chemical mace, went so far as to spray unsuspecting Vietnamese passers-by near our compound, then ask via an interpreter how the victim felt, pay the gagging man 500 piastres ($5), and send him on his way. His tests convinced him not to employ mace against an armed NVA.

Everything imaginable was tested or attempted but, despite sophisticated tactics, courageous men, and plenty of incentives, SOG teams snatched fewer than fifty prisoners from Laos and Cambodia during the entire war. It was just plain hard to do. 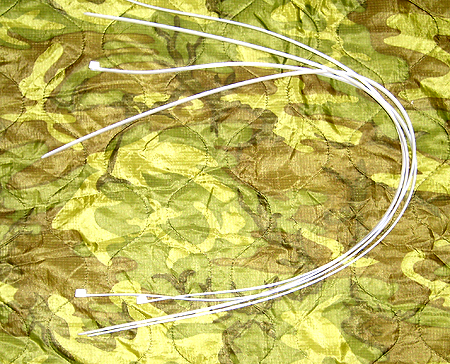 Some of the best snatches were improvisations, exploiting an opportunity, as had happened when David Gilmer’s RT Texas captured an enemy soldier on Highway 110 who was playing possum after a firefight.

Another team attempted a snatch, with five men pouncing upon an NVA who walked past them. After losing his AK, that lone soldier fought like a cornered rat and punched, kicked, and bit his way through the entire team, then ran down the road. “The One-Zero had so much respect for the son-of-a-bitch,” Bob Howard recounted, “that he wanted to see him get away. But before [the One-Zero] could shove down the muzzle, one of the Yards shot the guy.”

RT Florida One-Zero Master Sergeant Norm Doney disabled a lone NVA with a suppressed .22 pistol, and had him down, ready to be hog-tied, when a large NVA unit happened on the scene. An exploding RPG peppered Doney with shrapnel, and his would-be prisoner leaped for his AK but Doney groggily managed to shoot first, popping him several times with the suppressed pistol and killing him. With the NVA unit almost upon him, Doney re-joined One-One Joe Morris and ran to an LZ, where they found the rest of their team.

Someday, I hoped, I’d destroy a truck, or snatch a prisoner. With that in mind, I began my own experiments, making frequent use of our compound’s demo bunker, a cornucopia of mayhem — plastic explosives, dynamite, blasting caps, det cord, time delay detonators, exotic mines — anything I wanted, as much as I wanted, just blow it up, then come back for more. I thickened gasoline for a napalm claymore that hurled its jellied fuel like a quart wad of snot but wouldn’t ignite. Then I tested a time fuse firefight simulator, whose exploding blasting caps, I hoped, would fool the enemy into thinking they were being shot at. It worked marginally. My one real success was a technique to ignite smoke and tear gas grenades with a time fuse so they’d go off seconds, minutes, or even tens of minutes later, which isn’t found in any pyrotechnics book, though it would be a year before that trick came in handy. My explosives experiments never ended.”