SOG teams would carry a silenced STEN for prisoner snatch missions, it could be taken apart and stored in the rucksack until the precise moment it was needed.

The STEN name came out of names of the designers (R. V. Shepard and H. J. Turpin) and from the factory where they worked (Enfield arsenal). It was one of the most crude, ugly and simple, but effective submachine guns of the Second World War. Almost 4 million STEN guns of different versions were made between 1941 and 1945. STEN guns were made not only in Royal Small Arms factory in Enfield; other makers included famous British gun making company of the time BSA Ltd, as well as Royal Ordnance Arsenal in Fazakerley, England, and Long Branch Arsenal in Canada. 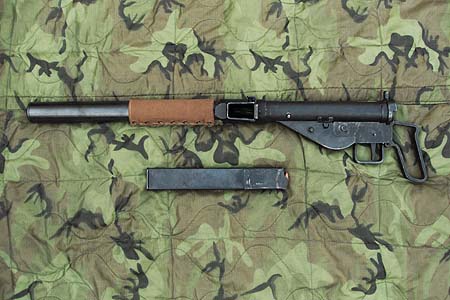 The first STEN, STEN Mk.I (full official name was 9mm STEN Machine Carbine, Mark 1), was developed in mid-1941. It was a blowback operated, automatic weapon that fired from the open bolt. Trigger unit permitted for single shots and full automatic fire, controlled by a cross-bolt type button, located in front and above the trigger. The tubular receiver and the barrel shroud were made from rolled steel. The gun was fed from a left side mounted box magazines. The stock was of the skeleton type, made from steel. Sights were fixed, pre-adjusted for 100 yards distance, peep hole rear and blade front. The Mk.1 featured spoon-like muzzle compensator. Some guns featured small folding forward grip. Total production of Mark 1 and slightly modified Mark 1* STEN machine guns was about 100 000.

The STEN Mk.II submachine gun was the most widely made gun in entire STEN series, with about 2 millions of the Mark 2 being made during the war. It was slightly smaller and lighter than the Mk.I. Basic design was the same as Mark 1, with omission of all wooden parts of the Mk.I and shorter barrel jacket, which made the Mk.II lighter than its predecessor. The magazine housing could be rotated 90 degrees down to close the feed and ejection apertures during transportation and off-battle carry (this feature caused much trouble as the rotary unit was not very durable and magazine could be misaligned during combat, what led to feed malfunctions and jams). Another source of problems was the magazine spring, so magazines were routinely loaded with 28-30 rounds instead of “full capacity” 32 rounds to reduce strain on the magazine spring.

Some Mk.II STEN guns were manufactured with integral silencers for undercover operations and were marked as Mk.II(S). These guns had shortened barrels enclosed into an integral silencer. The silencer was rather effective so the most audible sound when firing Mk.IIS was the clattering of the bolt moving back and forth in the receiver. Contemporary manuals advised that Mk.IIS submachine gun was to be fired in semi-automatic mode; the full-automatic fire was reserved for emergency situations, as it decreased the service life of the silencer significantly.