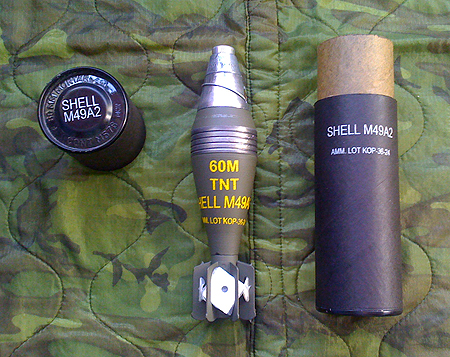 The M49A2 HE round is an explosive shell used against infantry and other light area targets. It is painted olive drab. It consists of a hollow body, fin assembly that screws on the rear of the body, and M525 fuse that is attached to the front of the round. A TNT bursting charge is contained in the body and is ignited by the booster charge in the fuse upon impact. The fin assembly contains the ignition cartridge and provides a means for attaching the propelling increments. The fins keep the projectiles stable in flight. It has a minimum range of 200 yards when fired without a boosting charge at a 70° angle and a maximum range of 2017 yards when fired with four boosting charges at a 45° angle. Each round comes in a separate fibre container complete for firing.