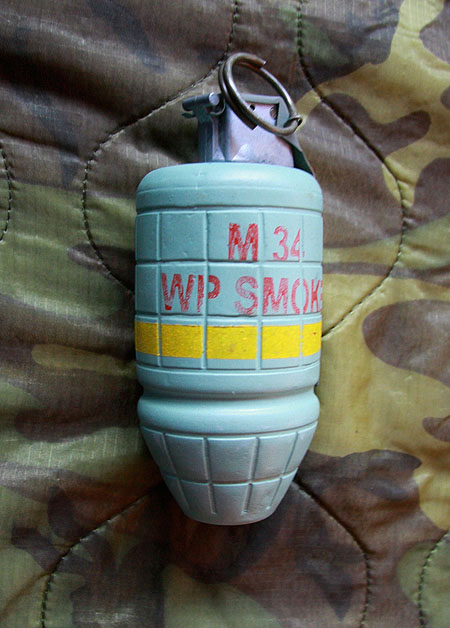 The M34 chemical smoke grenade is the most versatile of all hand grenades. The grenade can be used for signalling, screening, or incendiary missions, or for producing casualties. The use of this grenade also has a psychological impact on the enemy.

a. Body. The M34 WP grenade body is compressed fibre or plastic sphere.

b. Filler. The filler has 15 ounces of white phosphorous.

e. Capabilities. The average soldier can throw the grenade 30 meters. The grenade has a bursting radius of 35 meters. All friendly personnel within this 35-meter area should be in a covered position to avoid being struck by burning particles. The WP filler burns for about 60 seconds at a temperature of 5,000 degrees Fahrenheit. This intense heat causes the smoke produced by the grenade to rise rapidly, especially in cool climates, making the M34 grenade less desirable for use as a screening agent.

NOTE: Most M34 WP smoke hand grenades presently in use were manufactured before the standard color-coding system agreement and are painted according to the old colour code.

SOG teams would often use an M34 WP Grenade to mark their position to aircraft in triple-canopy jungle as normal smoke grenades would drift and take too long to get above the canopy. This is mentioned by John Plaster in his book, Secret Commandos: Behind Enemy Lines with the Elite Warriors of SOG