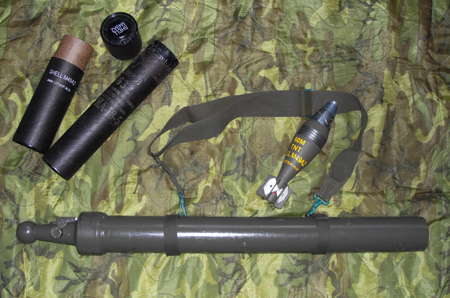 The M19 Mortar is a smoothbore, muzzle loading, high angle of fire weapon used by U.S. forces in World War II, the Korean War, and the Vietnam War for light infantry support. The M19 was used by some SOG recon teams when running “heavy” as a break contact weapon. When used like this the tube was used without the bipod and sighting device. A small base plate was sometimes used as well.. This set-up can be seen on page 93 of Running Recon by Frank Greco. 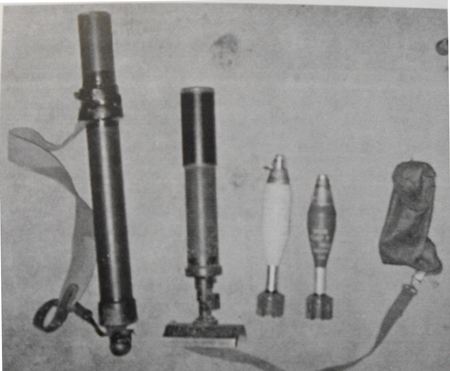 The U.S. M2 60 mm mortar was developed from the heavier 81 mm M1 Mortar to provide a lighter-weight alternative to company-level fire support. The M2 attempted to bridge the gap between the 80 mm mortar and the hand grenade. Normally employed by the weapons platoon of a U.S. infantry company, the M2 is of the usual mortar pattern of the day. It consists of a smoothbore metal tube on a rectangular baseplate, supported by a simple bipod with the elevation and traverse mechanisms. The firing pin was fixed in the base cap of the tube, and the bomb was fired automatically when it dropped down the barrel. Though classed as a light mortar, the M2 had considerable range compared to the 50 mm and 60 mm mortars of most other nations, and its fixed-firing pin design allowed a high rate of fire by trained crews. 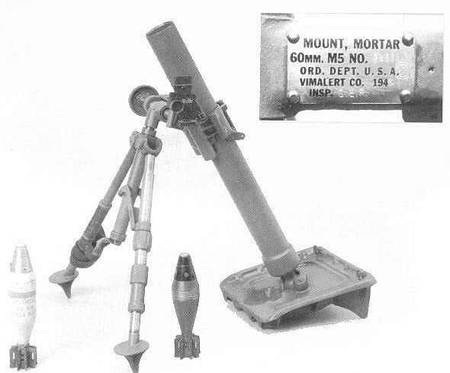 The original M19 just had a simple spade-like M1 baseplate, leaving the elevation and traverse free for the firer. This was found to be too inaccurate, and because of this the infantry initially refused the use of the M19. A new mount, the M5, was developed, which used a conventional baseplate and bipod with elevation and traverse adjustment. This gave the M19 better accuracy, but made it heavier than the M2 Mortar with less range. The primary difference between the M19 and preceding M2 was that the M19 could be fired with a loaded round via a lever trigger at the base of the tube as well as drop fired, while the M2 was drop-fire only.

The M19 fired the same ammunition used in the M2 mortar. The 60 mm mortar is used by the infantry to lob high-explosive M49A2 and white phosphorus smoke shells at well-protected hostile locations. The weapon can also fire illumination rounds to light up the battlefield at night.