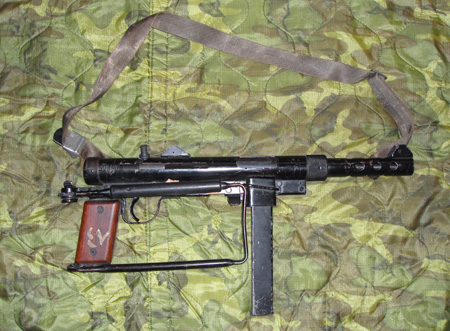 The “Swedish K” was used by SOG teams early in the Vietnam War as its origins were not in the US, so could be considered “sterile” for over the fence missions. later in the war SOG Recon Teams would carry the CAR 15/XM177 as its greater range and firepower was preferable.

Kulsprutepistol m/45 (Kpist m/45) also known as the Carl Gustaf    M/45 or the Swedish K SMG, is a 9 mm Swedish sub machine gun adopted in 1945 (hence the designation m/45) at the Carl Gustaf G-F facility in the city of Eskilstuna by Swedish weapons designer Gunnar Johnsson. The m/45 was the official sub machine gun of the Swedish Army after World War II. The m/45 was also used by U.S Special Forces in the Vietnam War, these weapons were devoid of markings. In U.S service it was known as “K-Rifle” or “Swedish-K”.

The m/45 was developed in 1944-45 lending and improving many design elements from earlier sub machine guns. The sheet metal stampings used in manufacturing the German MP40, the British Sten, the Soviet PPSh-41 and PPS-43 were studied in detail. A prototype version was ready for testing in 1944 and the first production version was adopted in 1945. 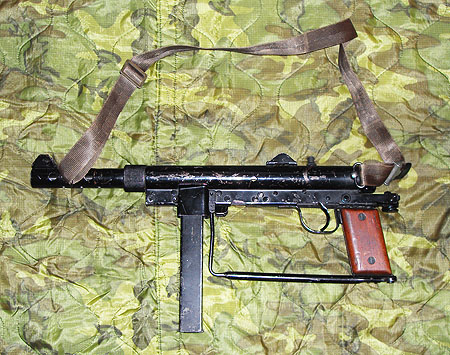 The m/45 is a fully automatic weapon. It weighs 3.9 kilograms and is 808mm in length with stock extended and 550mm when folded. It fires from an open bolt. Its relatively slow cyclic rate of fire and low recoil makes it easy to control during full automatic fire. It is accurate to 200 meters.

A special barrel for firing blank cartridges is available for the m/45. It should only be used with blanks and lower powered indoor (black bullet) ammunition. When firing blanks a blank firing adapter must be attached to the barrel. Other accessories include, night sights that clip on to the regular sights, a brass catcher to collect spent cartridges for reloading/recycling and a speed loader that can load a 36-round magazine in about six seconds. 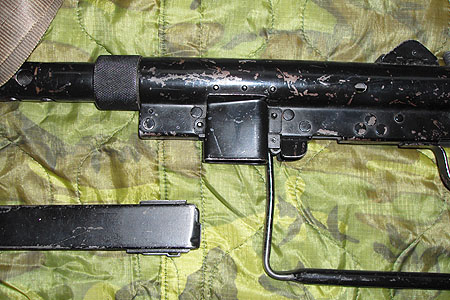 The magazine is wider in the rear than the front; this allows the cartridges to move despite dust and sub-zero temperature conditions, making it very reliable. Magazines that have parallel sides are much more likely to jam under cold conditions. The same type of magazine is used by the Czech model 23 and model 25 and the French MAS. 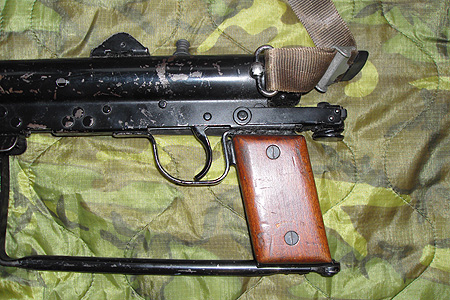 Furthermore, the m/45 has no safety switch. Instead, it is put on safety by sliding the cocking handle into a short side slot above the main slot (the “retracted position” referred to above). In the top picture, this side slot can be clearly seen behind the rear sight. This design results in a somewhat longer time to ready the weapon for firing, as the right hand must be moved away from the grip and trigger in a manner similar to a bolt-action rifle.

When the weapon is not loaded, the bolt is locked in place in the forward position.

Due to its spring-loaded mechanism, the m/45 has a distinctly metallic sound when fired.

The Kalashnikov Rifle & Its Many Variants