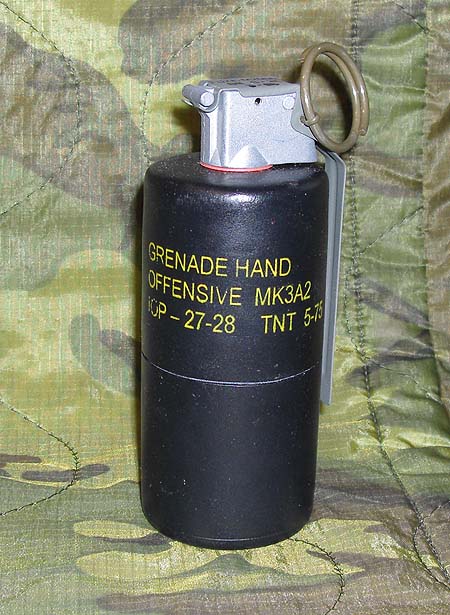 The MK3A2 offensive hand grenade, commonly referred to as the concussion grenade, is designed to produce casualties during close combat while minimizing danger to friendly personnel. The grenade is also used for concussion effects in enclosed areas, for blasting, and for demolition tasks. The shock waves (overpressure) produced by this grenade when used in enclosed areas are greater than those produced by the fragmentation grenade. It is, therefore, very effective against enemy soldiers located in bunkers, buildings, and fortified areas.

(1) Body. The body is fibre (similar to the packing container for the fragmentation grenade.)

(6) Capabilities. The average soldier can throw this grenade 40 meters. It has an effective casualty radius of 2 meters in open areas, but secondary missiles and bits of fuse may be projected as far as 200 meters from the detonation point.

(7) Colour and markings. The grenade is black with yellow markings around its middle.