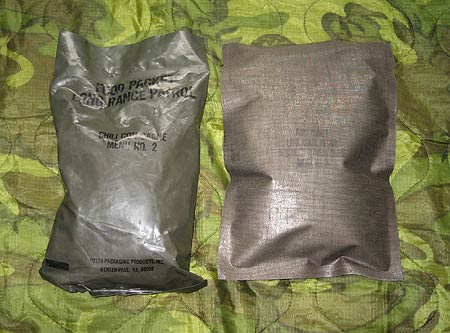 The LRP ration (pronounced LURP and standing for Long Range Patrol ration) was a U.S. Army field ration, developed in 1964 during the Vietnam Conflict. LRP rations were designed to be lightweight and easily portable, a precursor of the U.S. military’s current Meal, Ready-to-Eat (MRE) field ration. It was a freeze dried, vacuum-packed meal packed in a foil pouch stored in a grey-green canvas envelope weighting in at around 11 oz.  Its initial design was to replace the heavy wet canned MCI or C-ration, which due to the overuse of heavy canned wet rations reaching a ludicrous extreme during the early years of U.S. involvement in the Vietnam war, when American soldiers on extended infantry patrol were forced to stack their canned rations in socks to minimize weight and noise. The menu came in eight varieties: 1) Beef hash, 2) Beef and rice, 3) Beef stew, 4) Chicken and rice, 5) Chicken stew, 6) Chili con carne, 7) Pork and scalloped potatoes, and 8) Spaghetti with meat sauce, and some even contained freeze-dried ice cream for dessert. 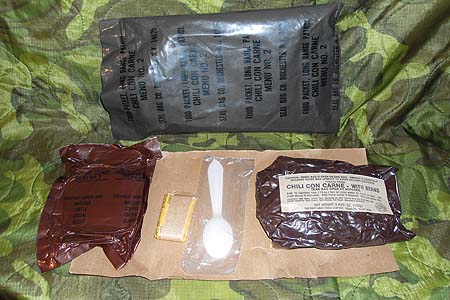 The drawback was that due to being freeze dried 0.7 litres (1.5 US pints) of water was required to cook and reconstitute them, which in Vietnam turned into a problem where fresh water could be hard to find or what water was available had to be boiled or treated with iodine. This led to the initial plan for widespread adoption being shelved and what had preliminarily been designated Food Packet, Individual, Combat (FPIC) became the LRP and was reserved for use by special operations units like SOG, Seals and LRRP’s.

Troops could eat them still dry and crumbled them up to eat them on the go, this would however mean the individual would need to drink extra water to stop the effects of dehydration. It was often mixed with canned C-Rations to reduce monotony and to supply extra dietary energy, as the ration was insufficient for an active soldier.

LRP Rations were sometimes called “Long rats”, the word “rats” being short for rations, while at the same time implying unpalatability by way of a pun with the rodent.