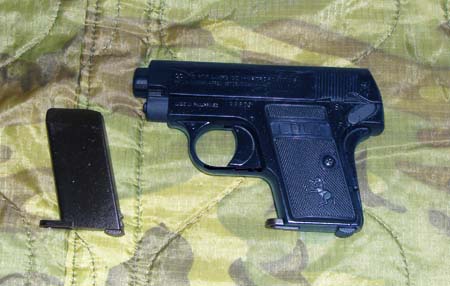 These Colt .25 Automatics were sometimes used by SOG team members as a last stand weapon, carried in the jungle shirt or close to their person.

The .25 Automatic has fairly high velocity for such a small cartridge. However, the energy it delivers at any range is quite low. This, combined with the full metal jacketed bullet, adds up to a very poor stopping or killing power on anything. The .25 Auto is not powerful enough for hunting anything but pests, nor is it adequate for serious self defence. However, the .25 auto calibre pistols are popular because of their small size and low cost. The principal usefulness is as a threat, because no one wants to get shot if it can be avoided, even with the little .25.

This cartridge was introduced in the United States in 1908 with the Browning-designed, Colt manufactured, .25 Vest Pocket Ammunition pistol. It was introduced in Europe a few years earlier in the F.N Baby Browning, which is practically identical to the Colt. The design of these two pistols has been copied by manufacturers all over the world. Literally dozens of different pistols have used this cartridge. The original Browning is still made (for European consumption), but Colt did not resume manufacture of their Vest Pocket model after World War II. American Arms, Beretta, Iver Johnson, Jennings, Lorcin, Phoenix Arms, Sundance, Taurus, Ortgies, Astra, Star, and Walther have all made pistols in this calibre.