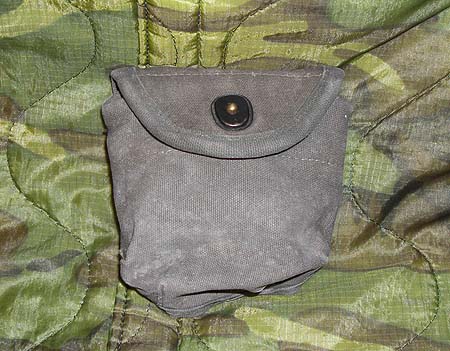 This is the pouch for the multiple wavelength long wire antenna for the VHF low band radios like the PRC-25 and PRC-77. It provides more gain than the whips antennas or the RC-292 or OE-254 fixed station omni-directional antennas. It is an unterminated wire unlike the OE-303 half rhombic that uses a termination.

It’s also used with HF radios like the PRC-104. When used at HF frequencies NVIS mode operation would be expected, like with the AS-2259, since it will be used at low elevations. 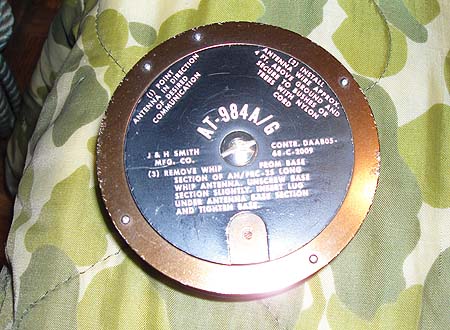 The antenna consists of a fishing reel that holds 150 feet of phosphor bronze antenna wire. The starting end of the wire has a “Y” lug that will fit under the AB-591 spring mast base to hold the wire on the antenna terminal of the PRC-25 or PRC-77 radio. By using the AB-591 the microswitch in the radio is depressed telling the radio that the 3 meter AT-271 fishing pole antenna is in use. Without the AB-591 the radio would try to match the 1 meter tape antenna. 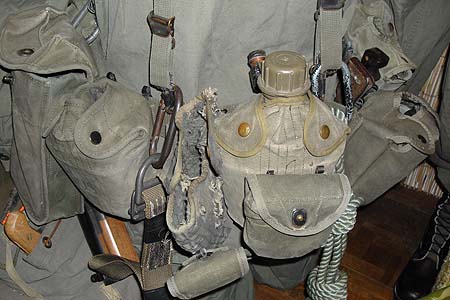 The AT-984 is carried in a canvas case that attaches to web gear using standard ALICE clips and can be seen in pictures of One-Zero John St Martin of RT New York.