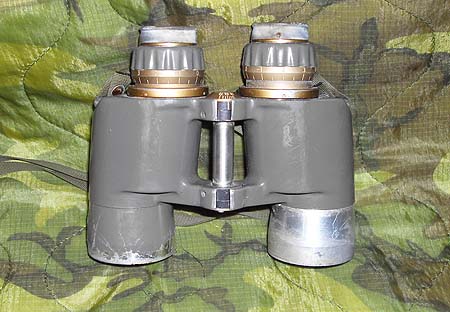 The M19, made for the US Army, is an unusual binocular. It employs a modular design, with interchangeable, pre-collimated, parts intended to simplify field servicing. The prism cluster is collimated in the factory using a reference jig and then cemented together. The objective and eyepiece assemblies are precision made to maintain collimation. Unfortunately, for the collector or hobbyist, this means that this binocular is not really serviceable. If you have a M19 that is out of collimation, you can try removing and remounting the prism clusters and hope that fixes it. Otherwise, you will have to find spare parts or scavenge from another set. The other feature of the M19 is that it is considerably smaller and lighter (34 vs. ~50 ounces) than the usual military 7×50. 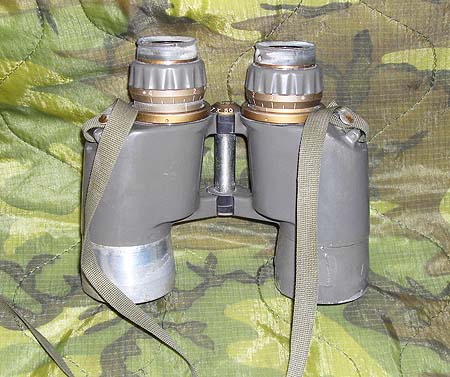 The optical design of the M19 is also unusual. It employs a 3 element air spaced telephoto type objective to reduce the focal length and thus the size of the binocular. The low f/3 focal ratio allowed the use of smaller prisms than usual , which were also made asymmetrical to further cut weight. However, the low focal ratio required a complex 6 element eyepiece for good correction. The Erfle type eyepiece is normally only found in wide angle designs, not the modest 50 degrees or so for the M19. In addition, the M19 employs a plano concave field flattener near the eyepiece which doubles as a reticle on one side. Field flatteners are rarely found in military handheld binoculars. The M19 is one of the few binoculars I have seen that produces an image nearly in focus from the centre all the way to the edge of the field. One place the designers skimped on the M19, though, is in baffling. The prisms don’t have any shielding and one can see areas of light leakage when looking through the eyepieces. Perhaps this was a trade-off to save weight. 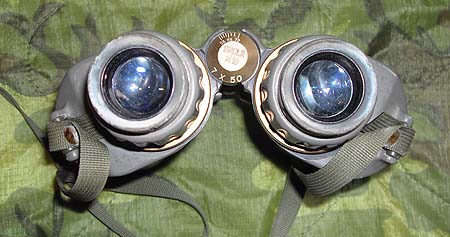