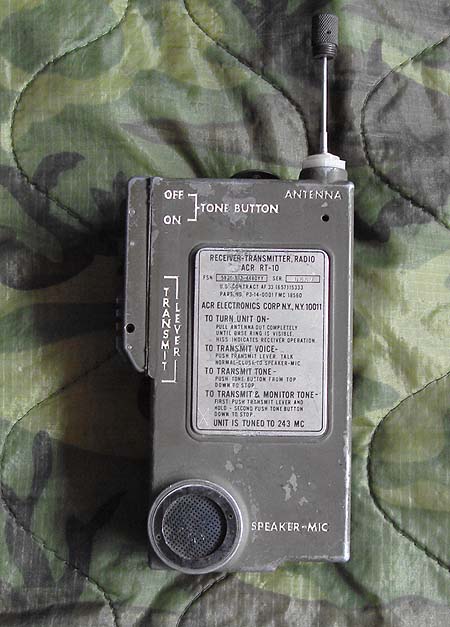 This is an example of the ACR RT-10 Survival radio as issued to pilots, these were used by SOG teams as an emergency radio and were often carried in the upper left pocket of the jungle uniform.

This is a sample of the text from the TM Manual.

” To operate the ARC-RT-10, pull the antenna all the way out until the basering is visible. To transmit voice, push transmit lever in, hold speakermicrophone close and speak in a normal voice. To transmit and monitortone, push transmit lever in and hold, then push tone button down to stop.The battery provided will operate the receiver-transmitter approximately 30hours at 68° or 15 hours at 32° on a duty cycle of approximately 50%transmit and 50% receive. Range of radio for line of-sight operation isapproximately 20 mile for homing and 10 miles for voice contact.

NOTE For maximum transmit and receive, keep handsaway from antenna when the radio is inoperation and hold in a vertical position withserial pointed straight up.”