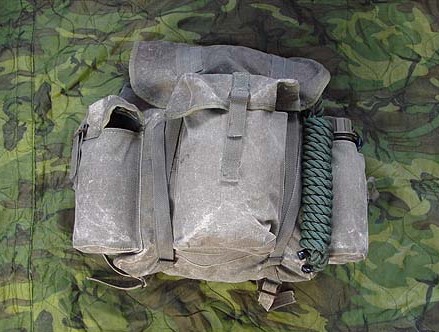 This CISO Indigenous rucksack was owned by SOG RT member CPT. Carleton Vencill. Vencill was a member of CCS in 1970.

Captain Carleton P. Vencill enlisted in the US Army in July 1964 and retired on 1st August 1985, as a Colonel (I believe).

NVA Rather Quit Than Fight 173d
TUY HOA- An NVA unit recently decided to disobey written orders from its Regimental Commander rather than defend a nearly impregnable Battalion sized Base Camp and Training Area against a Company of the Brigade.

The orders exhorting the camp’s defenders to stay and fight if the 173d entered the area were found among other documents in the camp by Bravo Company, 4/503d Infantry, who were on patrol several miles northwest of Tuy Hoa. According to the Company Commander Captain, Carleton P. Vencill of Yerington Nevada, Bravo Company had been moving up a stream when a ‘Kit Carson’ Scout, a former NVA Officer who rallied to Vietnamese government forces, spotted an NVA outpost on top of the steep stream bank.

The point element exchanged fire with the remaining enemy in the camp and one Platoon moved on line to assault the positions. The Paratroopers encountered no enemy but found a recently constructed Company sized base camp. After a quick search they pushed forward another 300 meters where they discovered a Battalion sized base camp.
It was situated in four levels along a ridgeline and ran 600 meters in length from a jumble of huge boulders to the peak of the hill. There were 40 or 50 fortified positions dug into the base of the boulders and numerous caves scattered among them. Some of the 30 huts found were still under construction. Four of them were mess huts which contained fresh rice and other signs of recent use. “The base camp, approximately two years old, was in the process of being rebuilt,” stated Captain Vencill. “I’d estimate there was at least a Company in the camp, but it could easily hold a Battalion.”

The next day Platoon sized reach-outs further explored the base camp and the surrounding area. Outside the camp, the Platoon’s pointman Pfc Bruce Welch of Roy Washington, found the training area which was 200 meters in length. It contained another mess hut, a classroom area, dummy wooden Chinese-Communist grenades and an infiltration course consisting of real and simulated barbed wire set up in single strand, double apron concertina and tanglefoot fashion with a bayonet dummy at the end. “The training area was only built about two or three days before we found it,” said Psg Wilbur Ali of Cusseta Ga, “so the NVA couldn’t have trained too much on the course if they did at all.” 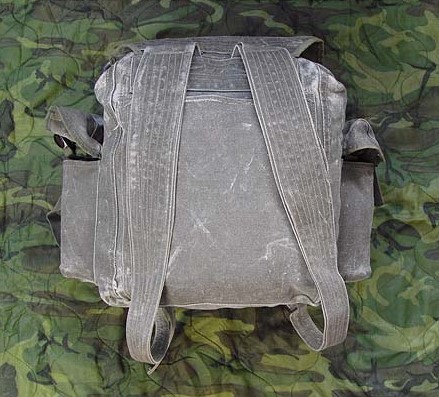 Conrad ‘Ben’ Baker of the Counterinsurgency Support Office (CISO) designed the indigenous rucksack based on a VC/NVA design on request of the Special Forces in Vietnam. The bag was intended to be used by CIDG troops hence the name, over 350,000 were produced.

The rucksack was made from rubberized cotton canvas that was water resistant, the CISO pack had a thin waist strap (often cut off as in the case of this rucksack) and featured three outside front pockets and a back map pocket inside the flap. Though designed for indigenous personnel and their advisors, the rucksack was also popular with SOG Recon teams before the Tropical Rucksack become a more common item.