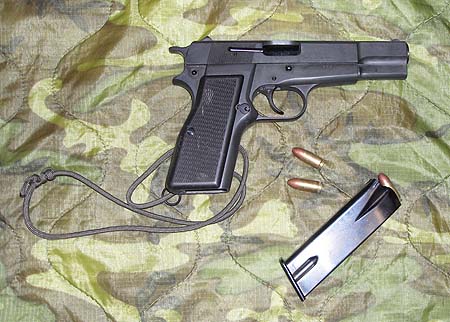 The Browning Hi-Power is a single-action,  9mm semi-automatic pistol. It is based on ideas conceived and patented in 1922 by American firearms inventor John Browning, and later patented by Fabrique Nationale (FN) of Herstal, Belgium. Browning died in 1926, before he had finished developing a production version. The design was fully developed and realised by Belgian arms designer Dieudonne Saive, working at FN.

The Hi-Power pistol was named for its 13-round magazine capacity, which was almost twice that of contemporary designs such as the Luger or Mauser 1910. The Hi-Power had the first functional double-column magazine of 9mm rounds, and was capable of holding 13 cartridges, with a 14th loaded in the chamber. Flush-fit 15 round magazines are now available, as well as higher capacity magazines which extend past the end of the butt.