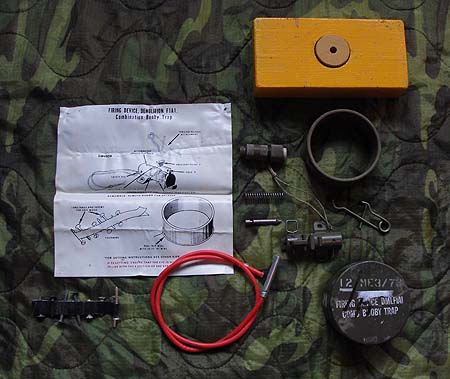 This is an Australian Switch that has been adopted by the US and renamed M142. It is now manufactured in the US. Can be used in all basic operating modes, pull, pressure, tension release, and pressure release. This is a inert practice device.

The basic component of the M142 Firing Device is a mechanical switch designed for mechanical actuation(to initiate the explosive)by pressure, pull, pressure release or tension release. In addition to it’s four-mode capability, the M142 can be used to ignite either a blasting cap (as in other firing devices) or time blasting fuse for setting a short delay type booby trap. The M142 is weather-sealed and will function under water. The firing device consists of a number of different components to facilitate operation in four modes.

The components, which make up the M142 are :

The SWITCH that incorporates two pivot pins, a sear plate, a spring and firing pin. A safety pin is also incorporated in the switch to prevent accidental initiation. It is positioned in front of the firing pin and is only removed after the desired operating mode is set up.

A TRIPWIRE 50 feet of copper wire wound on a cardboard spool. An olive drab coat of paint over the wire prevents if from accidentally unwinding and aids concealment. it is used in the tension release mode and in the pull mode.

A TENSION RELEASE attachment of specially formed stainless steel wire that has a spring type action. In the tension release mode, the attachment holds the tripwire under tension that , in turn, maintains the firing device in a constantly armed position. Actuation is initiated when the taut tripwire is cut which permits the sear plate to release the firing pin.

A COUPLING BODY, a cylindrical plastic assembly that contains the explosive initiating element, an M42 primer, but no blasting cap. The user installs the cap.

An INSTRUCTION SHEET giving abbreviated set up instructions is provided with each device.

FASTENERS, a set of nails and screws for securing the switch are included with each device.

The olive drab plastic switch and coupling body are unpainted. They are unmarked except for a yellow band painted on the coupling body. The brass safety pin and steel pivot pins are unpainted. The M142 Firing Device components, including the instruction sheet, screws and nails are packed in a cylindrical metal container 3-1/8 inches in diameter and 1-1/4 in high.